Year in Review: New Additions to the Northwest Metro in 2022

If 2021 was the year of saying goodbye to community staples like the AMC theater in Maple Grove, then 2022 was a year of new beginnings.

It’s just one of the many changes that came about over the last year as the world recovered from the pandemic.

During the past year, local cities finished work on important municipal buildings, like the new water treatment plant in Robbinsdale.

“For the majority of residents, they won’t need to use their softeners anymore,” said Robbinsdale Public Works Director Richard McCoy in August. “What we’re aiming for is to get the water to the approximate softness that you’d find with the city of Minneapolis.”

In Crystal, officers moved into a new, $16 million police headquarters that featured more space and amenities than the old building.

“This has been years coming and we’re really appreciative to a city that supports us and a city council and city staff that helped make this happen,” said Crystal Deputy Police Chief Brian Hubbard during a September interview.

And in Plymouth, the city’s new, $50 million community center opened. The building included an indoor playground as well as more space for athletics and events.

“It’s just a great asset for the community,” Plymouth Mayor Jeff Wosje said in October. “I’m so excited for everybody here.”

Meanwhile, people got back to dining out, but still kept their love for the drive-through.

In Brooklyn Park, they welcomed the new Taco Bell Defy. The building may look like a bank, but the design re-imagined the fast food drive-through by using a vertical lift system to deliver food to customers.

“Put the food in, push the two buttons and it’s on its way,” said Jarret Persons, a regional manager with Border foods.

Brooklyn Park also welcomed a new brewery called Heavy Rotation Brewing, and a new Raising Canes because you can never get enough chicken.

Over in New Hope, you can have coffee with cats at the Cafe Meow and adopt a feline friend while you’re there. 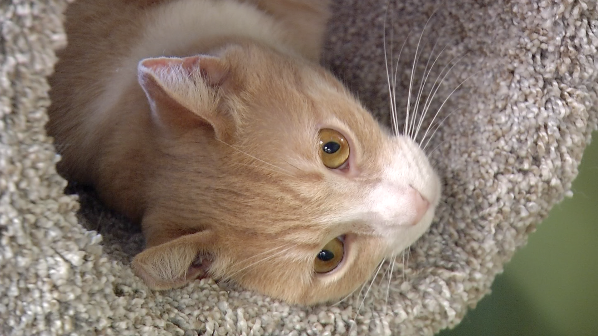 A cat enjoys time at The Cafe Meow in New Hope.

Then you can meander to Plymouth to enjoy a brew among the ambiance of barks at Brew Park, a combination dog park and cafe.

“Super great response from the community,” said Dr. Angie Woodward, the owner of Brew Park during a September interview. “We’ve had really fun dogs in here playing. Lots of zoomies.”

Another big project completed in 2022 was the West Broadway bridges that connect Robbinsdale to Minneapolis. That project lasted two years and helped to improve traffic flow in the area as well as access to the Theodore Wirth Parkway trails beneath the bridges.

The bridges opened right before Thanksgiving.