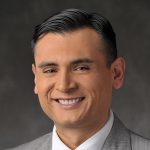 Delane Cleveland is a reporter, anchor and photographer who joined CCX News in 2011. He was born and raised in Minneapolis and graduated from the University of Minnesota with a degree in journalism in 2004.

He has spent more than a decade in television news, working at stations in South Dakota, Arizona and Minnesota; covering topics such as politics, education, health and everything in between. He’s a devoted Vikings fan (despite all of the years of heartbreak), an avid movie-goer and a fitness enthusiast.