In the northwest corner of Plymouth, thousands of cars use County Road 47 every day to travel from east to west.

But according to city officials, there are a number of issues with the road, which was originally designed in the 1920s.

“County Road 47 was designed almost 100 years ago for farm equipment, tractors,” said Plymouth Mayor Jeff Wosje. “And in 1960 it finally got paved, and it basically hasn’t changed since.”

That was one of the messages Plymouth city officials had for members of the Minnesota House of Representatives Capital Investment Committee, which visited the area Thursday afternoon as part of its bonding tour. 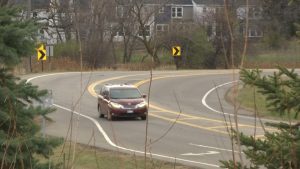 County Road 47 in Plymouth was originally built in the 1920s.

“It’s twists and turns,” Mayor Wosje said during the presentation. “There’s two feet on each side of the road, so you can’t bike, you can’t walk.”

In the last decade, the population grew by more than 10,000 people in this area. The Wayzata School District constructed Meadow Ridge Elementary along the road, which further necessitated an upgrade.

Now the city has a $30 million plan to modernize this four-mile stretch of road. It’s asking the state for $20 million in bonding dollars.

“Without these improvements, this roadway is not going to be able to provide a safe corridor for the region itself,” said Chris LaBounty, Plymouth’s public works director/city engineer.

Yet while Plymouth is asking the state for money, funding for this project has been complicated.

Hennepin County has agreed to provide $5 million, which would cover costs to resurface the road. However, the Plymouth City Council wanted more, but county officials say there’s only so much they can do.

“We understand where the city’s at and what they want to do, and we know that we have a lot of demands on our system,” said Colin Cox, a spokesman for Hennepin County’s transportation department. “We have 2,200 lane miles and about 150 bridges that we manage, and so, it’s a lot in that system to manage and we have a very specific process in terms of how we address some of those things.”

Now, it’s up to the state bonding committee to determine if they give Plymouth’s funding request the green light.