In the Twin Cities, there’s no shortage of places where you can buy burgers and fries. But none of those other spots have a direct connection to a famous family.

Walburgers is a national restaurant chain started by actors Mark and Donnie Wahlberg, along with their brother, chef Paul.

This past February, the franchise opened its second Minnesota location in Maple Grove.

“It’s definitely a family-friendly restaurant, suitable for all generations,” Decker said. “Our menu is chef-inspired. Not only do we offer burgers, but we also offer a wide variety of shakes, salads, starters, and a lot of stuff is made in house, which is really nice.”

Decker says they make their burgers with a combination of ground chuck, short rib and brisket.

“It really gives it a nice, juicy flavor,” she said. 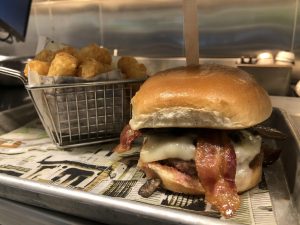 A cheeseburger with bacon and tater tots awaits diners at Wahlburgers.

That combination of the food, and the celebrity tie-in, made Wahlburgers quite the popular draw in those early days.

“We opened in February when it was full capacity, a hundred percent, dine-in, takeout, we were the hot-spot for sure, awesome sales,” Decker said.

But a little more than a month after opening, they learned that even a celebrity-themed restaurant isn’t “invincible” to a pandemic.

“Yeah so normally if we were open and allowed dine-in, you would see all these booths full,” Decker said, “especially by lunch time, dinner time.”

Yet one great thing about burgers and fries is that they translate well to takeout. Even with COVID restrictions in place that currently prevent indoor dining, Decker says business has been steady.

“We’re very fortunate that we’ve stayed pretty steady with the to-go business,” she said. “That’s allowed us to keep a lot of our staff working, which is awesome. Bartenders, servers, with us being Hy-Vee owned, they got to pick some hours up in grocery stores, which is really awesome.”

Of course, the goal is to eventually get those bartenders, servers and customers back inside the restaurant once it’s safe to do so.

Until then, they’ll keep going “Whal Out” to make food that people can enjoy from the comfort of home.

“I really hope we can get back to where we were when we first opened,” Decker said.