Tree removal crews have been a common sight in the southeast corner of Plymouth over the last two weeks. But the homeowners in this area didn’t hire these contractors for the purpose of beautifying their yards.

“I think there’s 16 trees on this side and there’s 47 over here in these two yards,” said Plymouth City Forester Paul Buck, pointing to trees infested with Emerald Ash Borer.

“It’s a non-native insect, and that’s part of the problem,” Buck said. “It comes here without any predators, anything that’s gonna slow it down.”

The small, invasive insect infects ash trees and spreads quickly, killing a majority of the trees in its path.

In the neighborhood around the southeast corner of Plymouth, Buck and his crew found 250 infested trees on city property and another 200 on private property. All have been marked with green paint. 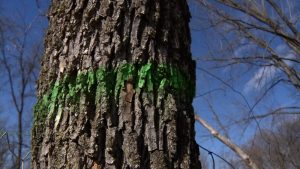 Trees in Plymouth infested with Emerald Ash Borer have been marked with green paint.

For the unlucky homeowners, Buck says the best course of action is to pay professionals to have the trees removed.

“If you let them die naturally, within two or three years they start to fall apart at a rapid speed,” he said.

Watch out for woodpecker holes

One way to tell if your tree has been infested is to take a look at the bark and examine whether it’s been attacked by woodpeckers. The woodpeckers are looking for EAB larvae underneath the bark, and Buck says the birds essentially point out which trees have the biggest infestations.

“Even the woodpeckers that are using it as food can’t eat it fast enough,” he said.

Meanwhile, buck recommends removing the trees now to prevent them from falling later. Doing so will also help to keep the bugs from spreading.

“We’re slowing the process down that maybe the next neighborhood over doesn’t have this huge explosion again,” he said.

For more information on the Emerald Ash Borer, check out the city’s website.