Brooklyn Center hired several outside interveners to mix with protesters and help open the lines of communication with police following last month’s police shooting death of Daunte Wright. One of them is C.J. Jessup, who founded 2ndChanceProject, a Minneapolis-based nonprofit that helps reintegrate people successfully back into society, whether they served time in prison, battled addiction or experienced other serious challenges.

“It’s inspiring for me because this is my way of silent protesting,” said C.J. Jessup, who founded 2ndChanceProject. “This is my way of saying something has to be done versus continuing to point fingers.”

On Wednesday, Jessup’s nonprofit helped organize an event titled “Heal the City” in the parking lot of Radisson Hotel Brooklyn Center. The purpose was to bring people from all different backgrounds together. The event included members of the Brooklyn Center Police Department and featured music, food and open dialogue. Jessup hopes to continue to do events like this in the future, possibly monthly or every other week.

“To be able to create open space so we can have open conversations so people will be able to express their opinions freely and then be able to start to heal at the same time,” said Jessup. 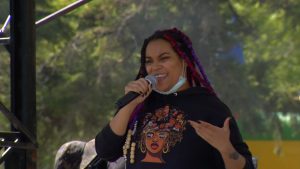 Live Music was part of “Heal the City” event

During the pandemic, Jessup and 2ndChanceProject partnered with the Radisson Hotel Brooklyn Center to help the homeless as part of Hennepin County’s Hotel-to-Home program. The effort helped at least 50 families experiencing homelessness. CCX News spoke in March with one of the families that 2ndChanceProject helped.