Brooklyn Center Resident Shares What It’s Like to Be Homeless

Gino Fiebelkorn has a lot to be thankful for these days. The Brooklyn Center resident knows where he is now is testament to overcoming some extremely difficult circumstances.

“I had homelessness a couple times in my life,” said Fiebelkorn.

Each bout of homelessness lasted about two and a half years, with each time linked to a difficult life experience. In one instance, his parents got divorced. In another, his father passed away. Both life setbacks led to a battle with drug addiction.

“I dealt with it the way that I could,” said Fiebelkorn. “It was tough, and it’s still tough. It’s even tough to think about.”

Treatment helped get his life back on track, as did his faith.

“I was lucky enough to meet some great people along the way,” he said. “I knew that God had something better for me out there.”

But Fiebelkorn doesn’t want his story to overshadow the pain others are experiencing now.

“I just really hope that the message that gets out there is that, we’re a paycheck away, many people,” he said.

The challenges of homelessness have only intensified during the pandemic due to job losses and lower wages. Fiebelkorn says he knows some of the people who have received help at Radisson Hotel Brooklyn Center, which received a contract from the state to help the homeless.

“They opened many, many floors to the homeless. And God bless ’em,” said Fiebelkorn about the effort.

Helping to manage the situation at the hotel is 2ndChanceProject, a Minneapolis-based nonprofit started earlier this year by C.J. Jessup.

“The Radisson has opened up every available option to us,” said Jessup.

Jessup said he started the hotel work in October after a third-party entity reached out to him to manage the Brooklyn Center effort.

“I had no idea what we were saying yes to, but I figured when we get there we’ll figure it out.”

Jessup says it has helped create a positive in what has been a difficult time for the hospitality industry. Many hotels in the Twin Cities report operating at under 30% capacity.

“That’s horrible, that’s a lot of jobs being lost,” he said. 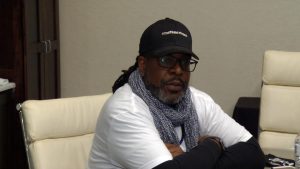 Brooklyn Center Hotel on Board with Vision to Help Homeless

Cameron Corrigan, general manager of Radisson Hotel Brooklyn Center, says Jessup’s nonprofit has made a difference helping those in need.

“Our hotel staff and our team is really on board with making the change and helping C.J. with his vision,” Corrigan said.

Visitors who step inside the hotel won’t notice anything different, other than a person in the front entry monitoring who is coming and going.

“It feels like a hotel. It feels comfortable, it’s quiet, it’s clean,” said Jessup. “There’s issues present, but they’re not present. Unless I sit down and tell you what the problem is, you wouldn’t know if you walked in here as a regular guest off the street.” 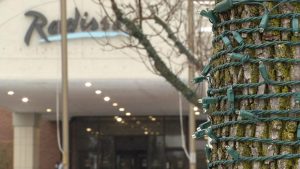 If you wonder where Jessup’s empathy and understanding took root, it’s because he lived through his own trying circumstances. Growing up in a southside suburb of Chicago, Jessup said he ran away from home at age 9 to escape abuse and dysfunction with his family. He says from age 9 until 21, the Illinois Department of Children and Family Services was his “guardian.”

State Contract for Hotel Program Runs Through End of Year

A big question facing the hotel and 2ndChanceProject is whether government funding for the effort will continue beyond this year. The current state contract runs out Dec. 31. Legislative efforts are being made in an attempt to extend the funding while the pandemic is ongoing, but the outcome is uncertain.

One thing that is certain is Jessup believe his nonprofit has made a significant difference since he took over the effort in October.

“At the end of the day, we are decreasing crime, we are employing, we’re housing. We’re helping a lot of people,” said Jessup.

2ndChanceProject also hopes to use donations to keep its work going at the hotel. To learn more about 2ndChanceProject, click here or visit the nonprofit’s GoFundMe page.