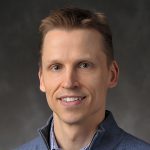 Corey enjoys living in Minnesota despite growing up in Wisconsin. He broke into the news business first working at WMTV, the NBC affiliate in Madison, Wis. He worked at WEAU-TV in Eau Claire, Wis., and KARE-TV in Golden Valley, Minn., before landing at CCX News to cover the northwest Twin Cities in 2005.

During his career, he covered the 9/11 attacks as a news producer at KARE-TV and coordinated coverage following the I-35W bridge collapse at CCX News. Most of all Corey enjoys telling stories of everyday people who inspire and aspire to do great things. His work has been recognized with numerous industry awards, including several regional Emmy awards.

Corey graduated from the University of Wisconsin-Madison where he studied both print and broadcast news writing. He enjoyed interviewing legendary basketball coach Dick Bennett while writing for the Badger Herald.

When not working, Corey is often training for his next marathon, cheering on Wisconsin Badger sports teams or spending time with his wife and two children.