Movie Theaters Slow to Bounce Back, Ask for Federal Relief

After three months of being closed due to the COVID-19 pandemic, Plymouth’s Emagine Willow Creek Theatre welcomed back moviegoers  June 19.

“It’s great. Yeah, I love it,” said Derek Rasmussen, a moviegoer from Minneapolis.

Rasmussen made his way to Willow Creek on Wednesday to see the 2008 film “Iron Man.”

“I love to go see movies, and so I drove all the way out here from south Minneapolis to see it,” Rasmussen said. 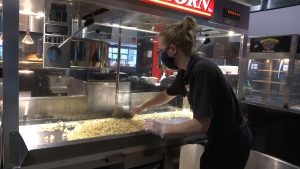 An employee from Plymouth’s Emagine Willow Creek prepares a fresh batch of popcorn for Wednesdays showings.

More than a month after reopening, Willow Creek is still showing classic films because Hollywood is reluctant to put the latest blockbusters on the big screen.

Rasmussen is just happy Willow Creek is open at all.

“Well I’m very encouraged that they’re open again, but I wish there were more of them open,” he said. “Some of them are opening and they’re closing again. So for example, St. Anthony Main was open for a few days and then they closed.”

Needless to say, it’s a challenging time for many businesses in this post-coronavirus world. Jon Goldstein, the Michigan-based managing partner for Emagine Theatres, said the movie theater chain is hanging in there despite circumstances beyond his control.

“We have governors saying you have to be closed, and we do our part for the public health to be closed, but it doesn’t mean that my rent goes away or my utility costs go away or the governor will shut us down,” Goldstein said. “But they’re not saying that we don’t have to pay our property taxes.”

The difficulty of having to make those payments while revenue is down is one reason why Goldstein is urging people to contact their member of Congress and ask them to support the RESTART Act. The bill would give movie theaters access to partially forgivable, seven-year loans that cover six months of expenses.

“I think it’s a community gathering place that needs to exist,” Goldstein said of movie theaters. “And I think that’s why we’re asking people if they believe in the same thing, to write Congress not just for the movie business, but all the businesses who need help to survive this.”

In the meantime, Goldstein is optimistic that Hollywood will get new films back on the big screen by September. Until then, customers like Rasmussen are hopeful that theaters will get the help they’re looking for.

“They’re already struggling a lot with competition from Netflix and other places,” Rasmussen said. “So to me it’s kind of an American tradition, so it would be nice if something could be helped out.”