In the Twin Cities, there are plenty of places where people can get a delicious beverage.

But one thing you won’t find at most of those shops, are drinks filled with small, flavor-filled bubbles, also known as boba.

“They are clear pearls filled with juice, and when you bite on them they burst out with flavor,” said Joey Pham, manager of Tii Cup in Brooklyn Park.

Tii Cup is a family-owned boba tea shop that opened in Brooklyn Park’s Northwind Plaza in 2012. It’s one of seven locations throughout the metro.

“So we make various kind of drinks, which will be tea drinks and smoothies,” Pham said. “And then we can add in those bobas to make it fun, right?”

Pham was one of the store’s first employees when it opened 10 years ago, and he’s still here to this day, creating a mixture of colorful boba tea concoctions.

It’s a drink that originated in Taiwan. 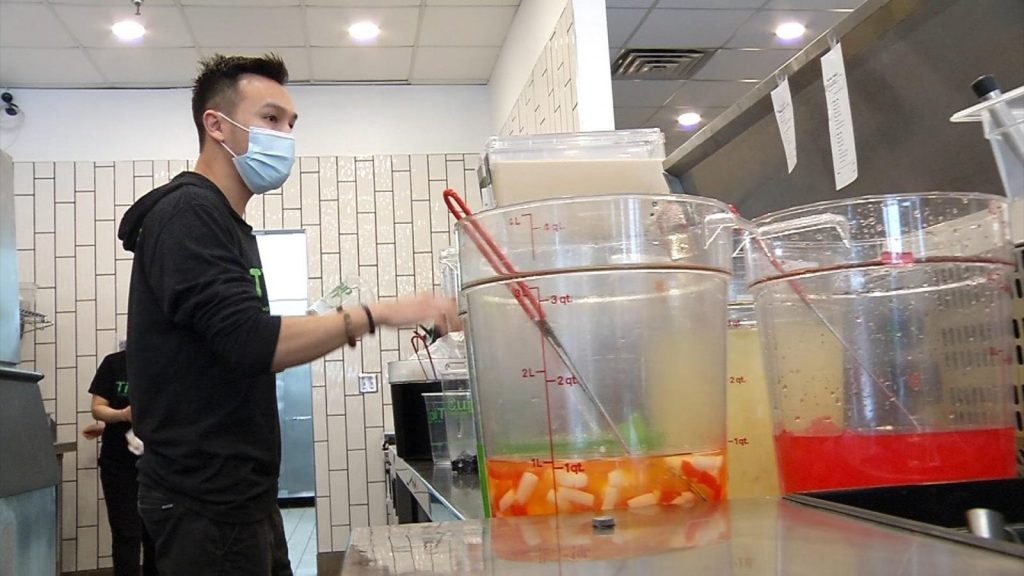 Joey Pham is the manager of Tii Cup, which is located at 7958 Brooklyn Blvd.

“Our mission was to introduce boba tea to everyone, and it’s actually working,” Pham said.

In the 10 years since Tii Cup opened, Pham says the store has evolved from attracting a primarily Asian customer base to now serving people of all different backgrounds.

“I mean, it’s okay to try new things. That’s how you know what you like,” said Keyana Robertson, a customer from St. Paul.

Word has definitely gotten out, as a constant flow of customers keeps Tii Cup staff members busy throughout the day.

“Especially at night,” Pham said. “Yeah that’s when everyone is done with work, and they’re done with school and everything. They just want a cup of tea.”

Only this tea that has considerably more flavor than what you’d get elsewhere.

“It’s really good,” Robertson said. “I mean, I like the strawberry pineapple. That’s my favorite kind.”

With more than a dozen flavors on the menu, Tii Cup has a little something for everyone.

“It’s like a fun treat for them every time they get to come in here,” Pham said.

On the weekends, the Brooklyn Park location also serves “Taiwanese Street Food” such as popcorn chicken and deep-fried tofu.