After playing to a 14-14 tie at halftime, the Cooper football team overpowered Robbinsdale district rival Armstrong in the second half to win 49-14.

Cooper’s David Connors started the game in style, returning the opening kickoff 82 yards for a score.

Armstrong answered with a Jamen Malone to Peyton Newbern touchdown pass to make it 7-7 after one quarter.

A big pass play from Joe Russell to Keith Pierro set up a Jaxon Howard one-yard touchdown on the first play of the second quarter for Cooper.

Malone and Newbern hooked up for another score through the air for Armstrong and it was 14-14 at the half.

The second half was all Cooper.

Nehemiah Ponder intercepted a screen pass and returned it for a score early in the third to make it 21-14.

Russell threw deep to Connors, who made a juggling catch after the ball was nearly intercepted and went in for a 45-yard TD to make it 28-14.

Camden Royal scored in the final minute of the quarter after the Hawks had intercepted another pass to make it 35-14.

They added two more scores in the fourth to secure the 49-14 victory.

It’s the sixth straight win for Cooper over Armstrong.

Both teams are now 2-1 this season. 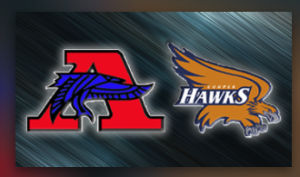