The Cooper football team rallied past Alexandria for a 21-17 win in the state class AAAAA quarterfinals Saturday.

It’s the first state tournament win in program history for the Hawks.

Alexandria came out strong, scoring on their first possession.

Cooper answered with a touchdown pass from Joe Russell to Terrence Matthews early in the second quarter to make it 7-7.

The tie didn’t last long, as Hoskins returned the ensuing kickoff 88 yards for a touchdown.

Late in the second quarter Alexandria blocked a punt deep in Cooper territory and kicked a field goal for a 17-7 halftime lead.

As the snow fell in the second half, Cooper rallied.

Quarterback Russell scored on a two-yard keeper to pull the Hawks within 17-14 midway through the third quarter.

Andre Reese, pressed into his first extensive ballcarrying duties with star running back Camden Royal out with an injury, scored the go-ahead TD early in the fourth.

Cooper’s defense pitched a shutout in the second half, stopping the Cardinals on downs in the fourth quarter after a nice drive. 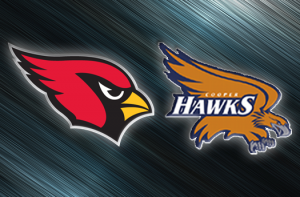