For anyone who uses Interstate-94 in Maple Grove, 2021 was a big year. After two years of lane closures and detours, construction on I-94 from Maple Grove to Rogers finally came to an end.

“I’ve been hearing about this project for so many years, and to be here to see the final product is really an honor,” Rep. Kristin Robbins, R-Maple Grove said at a ceremony in November.

Robbins was one of a number of local and state dignitaries who gathered in Dayton on a windy November day to celebrate the completion of the I-94 construction.

The $127 million project includes nine miles of new pavement, a fourth lane in each direction, and intersection improvements to some of the local roads connected to the freeway.

The project was completed on time and within budget,

“This is going to be a smoother, safer, and better section of road because of all this work,” said Margaret Anderson Kelliher, Minnesota’s transportation commissioner.

That wasn’t the only big construction project in the northwest suburbs.

In April, construction crews demolished the southbound bridge and spent the entire summer working on a complete reconstruction.

The work on that section finished in November. The county then shifted its attention to the northbound bridge.

“This year, this half is mainly focused on the southbound portion,” said Tony Schrempp, a Hennepin County project manager. “Where next year we’ll be focused more on the northbound, and kind of some of the ramp connections. And then some of the roadway down below kind of gets done in phases as well to try to keep traffic and all the movements as open as possible.” 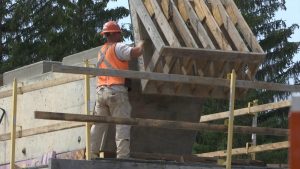 Also in Robbinsdale, city officials had to deal with the ongoing saga of the Metro Blue Line Light Rail Extension.

When BNSF Railway rejected the idea of letting light rail trains share its freight corridor, the Metropolitan Council, and Hennepin County, scrapped that idea and shifted its focus to Bottineau Boulevard.

However, city leaders in Robbinsdale weren’t enthusiastic about the idea of having trains go down the middle of County Road 81.

Council members raised concerns about safety for drivers and pedestrians, and they worried about potential disruptions to local businesses during construction.

“I personally am not very optimistic with this particular route that it won’t be so disruptive and so damaging to Robbinsdale to have it work,” Council Member Pat Backen said back in June.

The public has until Jan. 25, 2022 to comment on a draft route modification report. A final evaluation and route recommendation will happen in the spring of 2022.