According to the federal government, the project’s funding status is “to be determined.” Along with that funding uncertainty comes concerns about options for the new alignment.

The previous alignment was nixed because no agreement could be reached to share space next to BNSF Railway freight trains.

Proposals for the new route would put light rail trains on the middle of County Road 81. That idea has officials in Robbinsdale concerned.

“I personally am not very optimistic with this particular route that it won’t be so disruptive and so damaging to Robbinsdale to have it work,” said Robbinsdale City Council Member Pat Backen, one of the critics of the proposed route.

Backen says the proposal raises a lot of questions about how construction would impact businesses along County Road 81, how traffic would flow through the city, and how pedestrians would be able to safely cross the street. 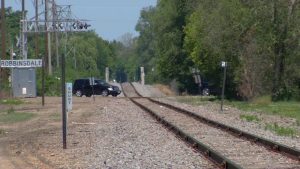 The original route for the light rail line was in a corridor next to BNSF Railway tracks.

The city wouldn’t have had to deal with all of those issues if BNSF Railway had agreed to share its freight corridor with light rail trains.

“My preferred route is still through the rail corridor and we still haven’t seen detailed drawings of how this might work on County Road 81,” Backen said. “We do have some pretty big concerns about if there’s enough space, what might happen to some of our service roads, how access would be granted to some of our businesses and things like that.”

In the meantime, Backen said the city has asked the project office to provide some renderings of what it would look like to elevate the route through a portion or all of Robbinsdale.

Meanwhile, there is still a long way to go before any sort of construction happens. But first, all of the cities along the corridor would have to provide municipal consent before the project can move forward. That means project leaders will have to address Robbinsdale’s concerns at some point.