Walgreens, the second largest pharmacy chain in the country, is planning a 52,000-square-foot facility in Brooklyn Park that officials say would significantly speed up delivery of customer prescriptions.

The facility, which would use state-of-the-art robotics technology, would be located at 10695 Winnetka Avenue, just east of Highway 169. The project was initially dubbed “Project Nucleus” until the company agreed to unveil its name at Monday night’s Brooklyn Park City Council meeting.

Officials with Walgreens say the facility would process 45,000 prescriptions in a day or 2,800 per hour. That’s compared to 300 in a day at a regular pharmacy.

“It’s really a push to get the prescriptions out in a really higher-tech way, as well as to serve the customers best in this region,” said Steve McClure, site selection consultant for Walgreens.

Called a micro-fulfillment center, the facility would feature $21 million in robotics technology. It’s expected to transform service delivery to six states in the Midwest.

Indianapolis-based Scannell Properties is leading construction on the facility, which Walgreens plans to lease. The Brooklyn Park site was chosen over other sites throughout Minnesota, Wisconsin and Iowa. 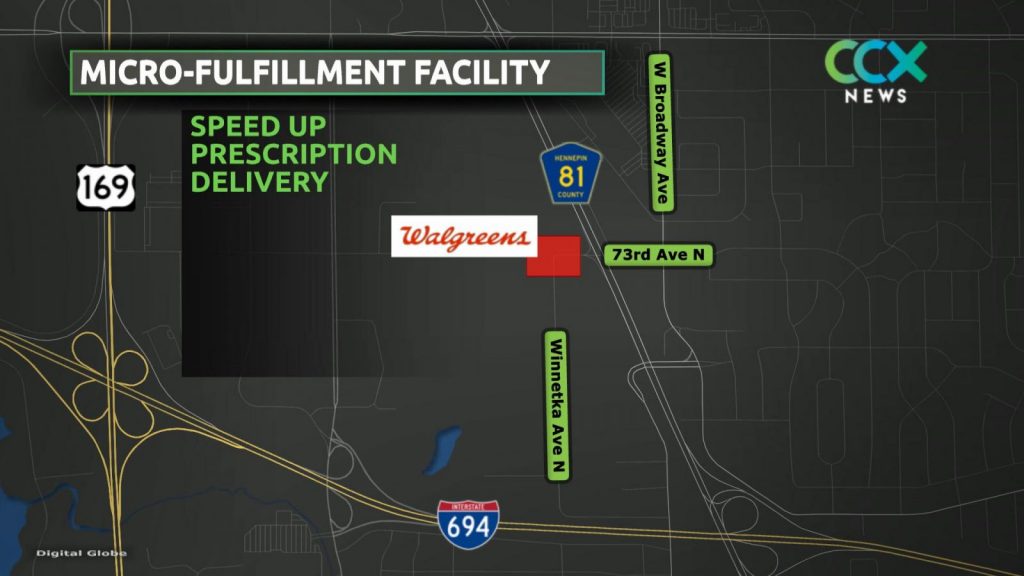 Walgreens is seeking job creation dollars for the project through the Minnesota Department of Employment and Economic Development (DEED). The company is requesting a $775,000 forgivable loan through the Minnesota Investment Fund (MIF) program, as well as funding through DEED’s Job Creation Fund.

According to company officials, the project is expected to create 142 full-time jobs. If job goals are not met, the state monies must be returned.

Since 2015, MIF has assisted in the creation of more than 1,000 jobs in Brooklyn Park, said Breanne Rothstein, the city’s economic development director.

When asked about the facility’s impact on neighbors, Walgreens officials said truck traffic would be minimal.

“The truck traffic is going to be light,” said McClure, who estimated about two semi trucks a day serving the site. “It’s not going to be a heavy usage facility.”

Correction: A previous version stated the micro fulfillment center would fill 300 prescriptions per hour. The correct figure is 2,800 per hour.