It’s been a difficult time for small craft beer makers. But a taproom in Golden Valley is trying to see the light at the end of the tunnel.

Under Pressure Brewing in Golden Valley is celebrating its 2nd anniversary this Friday and Saturday. The owners never could have imagined they would have to survive nearly a full year already without normal operations due to a pandemic.

“This shutdown has been devastating for us and still is,” said Lori Ertl, co-owner and founder of Under Pressure Brewing Co., referring to COVID-19 business restrictions. “It’s hard to get, you know, people are still scared, but I think it’s getting better, the weather is slowly starting to change, that will help too.”

The taproom, which is allowed to operate at 50 percent capacity, will be releasing two beers for its anniversary celebration: its new Uncle Davie Scotch Ale, named after the co-owner’s 95-year-old uncle; and its 2 Virgin Imperial Stout, a second rendition of a beer that has won numerous medals.

Ertl says a loyal following has helped her business persist.

“They continue to keep coming back, supporting us wonderfully. We can’t thank the community more for helping us through these situations. I mean, it’s just been awful and they’ve been here rallying us and supporting us,” she said.

If you never tried craft beer or looking for something new, Under Pressure Brewing has more than 26 beers on tap, plus offers more than 50 blends. 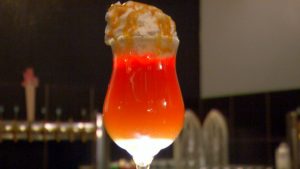 picture of Under Pressure Brewing’s butterbeer.