It’s said that breakfast is the most important meal of the day. And to fulfill that crucial need, look no farther than the big yellow shack next to the McDonald’s on Highway 55.

“My husband and I usually come here for breakfast. It’s our go-to spot,” said Jaime Quick of Maple Grove.

Their go-to spot is not only big and yellow, it’s covered with chickens.

“My family, my daughter, everybody calls it the chicken shack, or the chicken house,” said Stephanie Zwerk, a server at the establishment.

“My granddaughter calls it the chicken house,” said Jim McKinney, a customer. “That’s how we know it.”

The “chicken house” is officially known as Peg’s Countryside Cafe, a longtime staple just outside of Plymouth that brings in people for the food and the family-friendly atmosphere.

“It has great, home-cooked meals. Not a chain, which I like,” said Quick. “Really friendly staff and nice to support a local business.”

Families and even a few local celebrities have stopped into Peg’s over the decades. In fact, the entire restaurant is covered in photos of people who have dined here.

It’s a decorative feature that began in 1984 following a visit from actor/comedian Mickey Rooney. 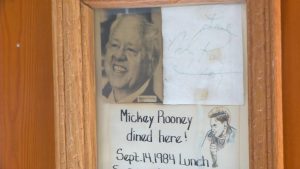 A photo and napkin signed by Mickey Rooney hangs on the wall at Peg’s.

“He had signed a napkin for Peg,” said Zwerk, the server. “So she took the napkin. She put it on the wall with a newspaper clipping and the date and time that he came in. Well, she had owned the cafe for, I want to say close to a decade at this point, so all her regulars were like, ‘I come in every day, how come I don’t get a picture on the wall? That’s not fair, I’m here all the time.’ So all the pictures are just customers who have been coming in over the years.”

Peg is the former owner, Peg Rasmussen, who sold the diner to one of her staff members, Rene Calle, two years ago.

Adapting to the pandemic

For the time being, those customers can’t dine inside due to a statewide mandate aimed at slowing the spread of COVID-19. But they’ve found other ways to support.

In normal times, customers would eat the food right after it’s taken off the grill. But like everything during the pandemic, people have to adjust to the new reality of takeout. 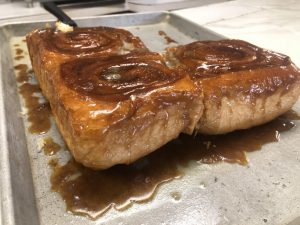 Some of the rolls you can buy over at Peg’s Countryside Cafe.

“Everything is hot and made to order, and I think they’ve been doing a great job adapting to this trying time that we’re all experiencing,” said Quick.

There was talk last month of having to close Mondays and Tuesdays because business was slow. But then word leaked out, and loyal customers came out in full force to support.

“That’s what we hear from everybody that’s been coming in, is just, we don’t want to see you guys even have to close two days a week,” Zwerk said.

So next time you’re craving breakfast food or a no-frills lunch, check out the big yellow shack next to McDonald’s for a meal that keeps customers coming back year after year.