As Minnesota celebrates the opening of fishing season, local bait shop owners are seeing a surge of new faces taking interest in fishing.

Brian Sularz, the owner of Big B’s Bait and Tackle in Plymouth, said sales this time of the year is 40 percent higher than sales around the same time last year. 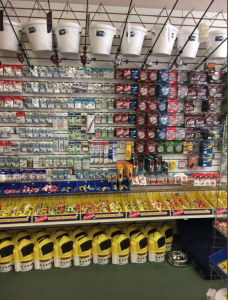 “There’s no comparison at all. We almost doubled April in just half the time” Sularz said. “It’s not normal. Absolutely not, especially during crappie season.”

Sularz explained that before the opener, when people can start fishing for northerns and walleyes, the shop is generally slow.

“New faces, it’s incredible. There’s people from all walks of life that either haven’t fished since they were a kid or they’ve never fished at all,” he said. “They never thought about trying it and all of a sudden they’re buying their first pole.”

Fishing shops that are primarily digital like Omnia Fishing in Golden Valley have also seen a spike in sales.

“We’ve exceeded our targets every month this year and April was a record for us,” said Matt Johnson, CEO of Omnia Fishing. “Although we don’t have our physical retail store operating other than pick up, we are seeing a huge jump in online sales.”

Fishing Licenses Are Up Too

The Minnesota Department of Natural Resources said overall fishing licenses sales are up 48 percent statewide through the Friday before the opener.

Currently, about 320,500 people bought their fishing licenses. Last year, around the same time, there were only about 217,000 licenses.

Sularz believes people are turning to fishing to fill the void of closed bars, restaurants and sports.

“So many people are out of work. They need something to do. It’s a great way to pass the time and you can still practice social distance when you’re out fishing,” said Solarz.

Solarz said he’s expecting an even busier weekend during the opener.

“You’re just adding different fish and different species to the list of things that people can do now,” Sularz said. “I think it’s going to be absolutely phenomenal.”