Another special session of the Minnesota legislature kicked off Monday. 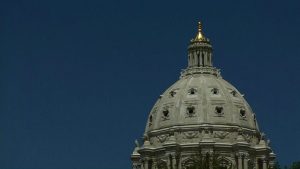 Lawmakers face a series of unresolved issues this week, as they hope to forge bipartisan deals on the state bonding bill, police reform and accountability, economic relief for businesses hit hard by the social unrest in the aftermath of George Floyd’s death, and the extension of Governor Tim Walz’s emergency powers.

The session was supposed to have ended on May 18, but the onset of the COVID-19 pandemic prevented lawmakers from completing their work. A special session that went from June 12-19 also ended without resolving some of those major issues.

One of the key sticking points involves the emergency powers granted to Governor Walz during the coronavirus pandemic. The Republican-led Senate approved a resolution on Monday to rescind those emergency powers. However, the DFL-controlled House likely won’t follow the Senate’s lead, which means that the governor’s emergency powers – and his executive orders – would remain intact through the middle of August.

“In the Minnesota House of Representatives, we believe that it’s important for those emergency powers to continue,” said House Speaker Melissa Hortman, DFL-Brooklyn Park. “The pandemic is concerning. Patterns in the southern states are especially concerning if they reflect that when people go inside there is a little bit of a runaway contagion problem.”

Republican House Minority Leader Kurt Daudt remains steadfast in his belief that that the legislature will not be passing a bonding bill while the governor’s emergency powers remain in effect. A bonding bill requires a three-fifths majority, or 81 votes, and must originate in the House.

“I have respectfully requested Minority Leader Daudt to de-link the issue of the bonding bill and the emergency powers,” Hortman said. “I think it’s entirely within the right of the Minority Leader to continue to fight the existence of the emergency powers with every fiber of his being, and with every member of his party. I don’t think that concern and that mission of his has to be linked to our action on the bonding bill.”

When asked about whether the emergency powers and the bonding bill should be “de-linked,” Senator Limmer said he’s certainly in favor of the governor relinquishing his ‘singular one-man power over the state,’ but conceded that the issue shouldn’t hold up the bonding bill.

“Our economy has been hurt by the COVID-19 isolation,” Limmer said. “And the bonding bill, if we got money rolling, got our civic projects up and rolling again, that’s going to put a lot of people back to work, and it’s also going to be a tremendous shot in the arm for our economy. And I think that’s very important for us to consider. I just don’t think it’s the right moment to hold a bonding bill captive. I think we can cajole the governor into releasing some of this authority and power under his peacetime, one-man rule, different ways. I just don’t think it’s necessary to hold up a bonding bill.”

Meanwhile, police reform and accountability will be another big topic of discussion this week. Speaker Hortman says the conversation between Democrats and Republicans at the State Capitol only began during the last special session, but she’s hopeful an agreement will happen this week.

“There is a genuine desire on the part of everyone to get there,” Hortman said. “The question is, will the reform and accountability that Republicans are willing to live with be good enough for Democrats? I mean, we are very serious about the reform and the accountability pieces of that. More rules and more training are not going to change lives. What we need are consequences for failure to live up to the standards.”

On that topic, Senator Limmer says they’re still negotiating the police accountability bill, but they’re “very close” on many of the major provisions of the House and Senate proposals.

“And we agree on a lot of things,” Limmer said. “We agree on enhanced training for law enforcement, like de-escalation programs, crisis intervention. We agree on mandatory reporting of police on deadly force incidents to the BCA (Bureau of Criminal Apprehension). We agree on banning chokeholds, neck restraints. We agree on requiring a duty of a police officer to intervene and report to their superior on scenes of excessive force. If one police officers sees another one going too far, he has to intervene and report that incident. We’re also wanting police officers to understand a concept called ‘sanctity of life,’ that you don’t use deadly force for every incident. And quite honestly, they do, do that, but sometimes you just need to have a repeat instruction on that often so that we don’t just relate to deadly violence to affect an arrest.”

One of the other hot topics this week will be whether many of the businesses in Minneapolis and St. Paul destroyed by the civil unrest in the wake of George Floyd’s death will receive financial aid to help them rebuild.

“The people who were out there protecting their homes, protecting their businesses, protecting community assets from fires and from the civil unrest, those people were not at fault,” said House Majority Leader Ryan Winkler, DFL-Golden Valley. “It was as if a tornado or wildfire came through those neighborhoods. In Minnesota, we have a long tradition of sticking up for and helping communities hurt by that kind of disaster.”

Senator Limmer says the Senate recently held hearings where they listened to business owners who experienced loss due to the unrest, but he expects the topic of aid for those businesses to be a difficult issue this week.

“Our rural members think that there was too much delay caused by the governance of the city of Minneapolis, the mayor, and the governor by responding so slowly to rioters and looters and the burning of Minneapolis,” Limmer said. “Their taxpayers out in rural Minnesota simply don’t want to put a dollar into the city of Minneapolis or St. Paul because of that delay caused by other people. It wasn’t the responsibility of rural members, or rural citizens, to cause such a delay.”

The legislature has the next week to come to a bipartisan agreement on all of these issues.