Winter came a little early this year. Many local public works departments are busy maintaining the roads, and they’re also preparing for something else—COVID-19.

About seven inches of snow fell in the northwest metro on Tuesday, and we could see another round of snow by the end of the week. Plymouth Public Works crews are ready to plow over 320 miles of city streets.

“This has been just a crazy year whether it’s COVID or this historical snowstorm,” said Plymouth Public Works Director Michael Thompson. He says the city has taken several steps to keep employees on the job and safe from the virus. 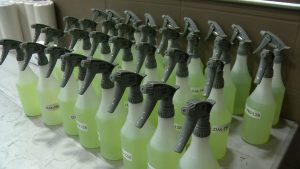 There are sanitizing stations in the building for employees to wipe down vehicles and equipment. They are also staggering shifts to limit how many people are in the building at one time. And if anyone were to get sick and have to quarantine at home, Plymouth has a plan. They would first shift staff from their Parks and Recreation Department, and if those resources ran out, they have another option.

“We would use our mutual aid pact that we have with Hennepin County Emergency Management,” explained Thompson.

In 2018, the Plymouth city council approved participating in the “Minnesota Statewide Public Works Mutual Aid Pact,” which allows cities to borrow resources from other neighboring towns who are part of the agreement.

Crystal Public Works Director Mark Ray spearheaded the public works deal. “For us, smaller cities, even losing a few staff, can have a significant impact on the operations,” said Ray.

More than 15 cities are participating in the program, including Brooklyn Center and Golden Valley. Each city works out the details among themselves when it comes to resources. “The nice thing about this agreement is that it provides the legal framework,” Ray said.

Hennepin County Public Works is not part of the mutual aid pact, but they have an unofficial agreement to work with cities.

“I’ve reached out to about a dozen of them, and all of them have agreed to help out in their jurisdiction if there’s a county road that they could open up for us,” explained Andy Kraemer, Hennepin County Road Operations Manager.

Because in a year of uncertainty, it’s good to have a back up to the backup plan.