Low lake levels, shallow streams and dried-up creeks are familiar sights throughout Hennepin County. The county is currently in a severe drought, with the northwest portion entering into extreme drought.

The dry conditions has some trees already turning colors in Plymouth. According to the Minnesota Department of Resources, some areas of the state have received less than 0.5 inches of rain in August.

“We’re not getting any precipitation to help us,” said Plymouth City Forester Paul Buck.

Buck says Plymouth workers have to do something they haven’t done in decades to keep plants and trees alive.

“Typically in a normal summer, whatever that may be, we would water oh, every third or fourth week, and this year we’ve been watering every day, all summer, except when it rains, and it’s still not enough,” Buck explained. 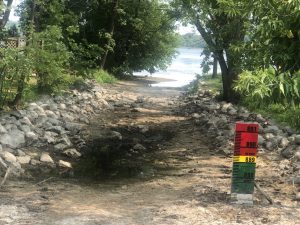 Outlet near Medicine Lake in Plymouth has dried up.

The drought is also impacting lake levels. Experts say water levels in the Plymouth area are about a foot lower than average. And a water outlet near Medicine Lake has dried up.

“I’ve never seen it this dry before. People aren’t able to get their boats out right now at the landing. It’s dry across the whole lake,” said Plymouth resident Cindy Mikolai.

And conditions are changing by the day.

“A couple of days ago, there was still water in the stream, and we could see crawdads and stuff like that under the water, and now there are just two puddles,” said Plymouth resident Thomas Stout.

The increase in shoreline off East Medicine Lake Beach is very noticeable. People had to walk much further if they wanted to play in the water.

“This is low, in my opinion. When I grew up here, I use to come out here and fly fish, and this is as low as I’ve ever seen it,” said another Plymouth resident.