If you are a car enthusiast, go to a car show and chances are you’ll find someone you know.

If you don’t know them, you just might coincidentally follow them home. That’s what happened to Brian Warhol, from Plymouth.

“There’s a red corvette from Plymouth. I found out at Wagners Drive-in one night, he lives two blocks from me,” said Warhol with a laugh. “I didn’t know until I followed him home.”

Warhol brought his Chevy Citation X-11 to the Street Machine Nationals car show in St. Paul. He says it’s a pretty rare car and there’s only two in the state.

If you missed the previous big car shows in St. Paul, go to Wagner’s Drive-in on Saturday, July 24 from 4 p.m. to 8 p.m. for a car show and free concert featuring “Apostles.” 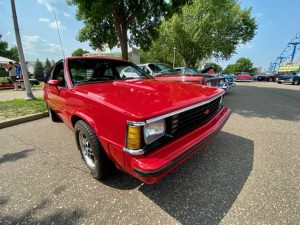 Brian Warhol also hosts a show called “Garage” where he talks cars and more.  You can check it out here.