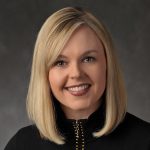 Shannon came to the Twin Cities from Shreveport, Louisiana where she was an anchor and reporter for the NBC affiliate. While there, she covered the Columbia shuttle recovery effort in East Texas and the aftermath of Hurricane Katrina in New Orleans as well as several other stories in the Ark-La-Tex.

Shannon has reported, anchored, and produced for CCX News since 2008 and her work has received regional Emmy awards and awards from the Midwest Broadcast News Association.

Shannon loves to travel, and has enjoyed getting to know the places and people of Minnesota. She enjoys working with local charities and participating in local volunteer organizations. On a beautiful day, you can find Shannon enjoying the outdoors with her husband and two children. In the winter, you can probably find her inside a hockey rink with her family.