In nearly every town in America, you can find a good burger. But there are only a few places that can legitimately make the argument they have the best burgers in town.

“You won’t ever find a burger like Wagner’s burgers,” said Hunter Herlofsky, a customer from Crystal.

Since 1985, Wagner’s has served up traditional American comfort food.

“I mean we’re classic,” said Jim Wagner, the owner of Wagner’s Drive-In. “We got the shakes and malts, and the burgers, and we also offer different sandwiches.”

The menu itself isn’t particularly unique. Yet if you talk to customers, it’s the nostalgia that keeps them coming back for more.

“Good remembrance as a kid, and I still come here now as an adult,” said Herlofsky.

“It looks and tastes the same since I was a child,” said Courtney. “Even the picnic tables are the same. It just reminds me of being with family and brothers and sisters and it just brings me back.”

The fact that people actually can come back is a bit of a miracle in itself. In 2013, someone crashed into the side of the building. Then two years later, it happened again.

But community support for this classic American drive-in kept the business alive.

Meanwhile, the medical team from the University of Minnesota is doing the same for Jim Wagner, who’s battling skin cancer and a host of other ailments.

“I’m, right now, I believe, in remission,” he said. “I will have another pet scan to see if there’s any more cancer.” 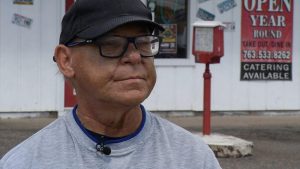 Despite the health issues, Wagner shows up every day but Sunday and works 12-hour shifts to keep the restaurant going.

“He’s dedicated. Props to him,” Courtney said. “He probably loves this place just like everybody else does.”

It’s a business that thrived during the pandemic, and survived two car crashes. Now, the most challenging part is finding enough staff.

“I used to love it a lot. Now it’s harder than hell to get employees,” Wagner said.

Good help may be hard to find. But the search for a good burger ends right here along West Broadway in Brooklyn Park.

“I just hope it never closes, ever,” Courtney said. “I just love this place.”