It’s a decision that’s been months – and even years – in the making. What to do about the possibility of housing going into what is now the former Hollydale Golf Course? In a 4-3 vote on Tuesday, Nov. 10, the Plymouth City Council sided against reguiding the land-use designation for the 160-acre course that would allow 229 units of low-density housing.

The housing plan came up in July of last year when Rick and Lynette Deziel, the owners of the course, decided to sell the property. They chose Jake Walesch and Dave Gonyea, two Plymouth-based housing developers with considerable ties to the area.

“The city really appreciates what they’ve done for the last two generations and last 60 years,” said Plymouth Mayor Jeff Wosje about the Deziel family. “They’ve provided this recreation of golf to the citizens of Plymouth and the surrounding communities.”

However, the possibility of redeveloping a landlocked golf course with minimal road access has shaken the nerves and unearthed opposition from hundreds of neighboring homeowners.

“You are losing the faith of your community by making that kind of decision,” said Kent Johnson, a nearby homeowner speaking to the council during a three-hour discussion on the issue.

“It’s the last regulation length golf course left in the city. This should be a non-starter,” said Mark Kraemer, another resident. “There is no precedent for a city of this size and income level not to have a golf course.”

The push to keep the course as green space has weighed on the minds of Plymouth City Council members for months. Council members even considered having the city purchase the property, which required a couple closed-door meetings. Cities are allowed to have non-public meetings when discussing land purchases.

“At the end of those two closed meetings, we had basically come to a consensus that we did not want to pursue that,” said Wosje. “The council didn’t feel it was prudent to do a purchase of this magnitude that had never been planned for.”

In fact, the city considered purchasing the property as far back as 2006. No previous councils acted either.

“Everybody is sorry to see this close,” Wosje said at Tuesday’s meeting. “We understand there comes a time for that and that time has come.”

During Tuesday’s three-hour meeting, about 10 residents spoke and countless others submitted emails against the project. A petition that included at least 2,400 signatures also circulated opposing the development.

Grant Barrick expressed frustration that the city voted for its 2040 comprehensive plan in 2019 and now could make changes to it.

“If we citizens can’t trust to what you have said, written and approved, then what can we trust that you do in the future,” said Barrick.

Melanie Huhta urged the city to get other entities involved.

“There’s more than one option than just the city buying the property,” said Huhta, saying the Metropolitan Council and Three Rivers Park District should also be involved.

At least three city council members said they have reached out to entities like Three Rivers, but there was no interest. Three Rivers had enough land in Plymouth with French Regional Park, they said. 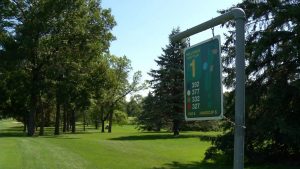 Jora Deziel Bart, daughter of the Hollydale owners, urged the council to support the project saying the family kept the neighbor’s interests in mind. Deziel Bart says the developer’s plan addresses concerns with drainage issues, provides for parks, green space and trails, and has the least impact regarding traffic. The project also includes plans for a rusty patched bumblebee habitat.

“My parents were proud to own a business in Plymouth and always found the community to be very supportive. However, this past year they were surprised and saddened by the reaction of some of the residents,” she said.

The Hollydale site, which opened as a golf course in 1965, currently has a land-use designation of public/semi-public/institutional or P-I. Such a designation allows public parks and open space. But it also allows public buildings, which could include schools, libraries, churches, even a correctional center. The P-I designation concerned some council members about what could go in there.

“Hennepin County could expand a correctional center in there and there would be very little we could do about it,” said Wosje.

Some council members felt low-density housing may be the best option considering the alternatives. Living Area-1, or LA-1, allows low-density neighborhoods and complementary uses such as schools, churches and recreation centers.

“The proposal that Gonyea has brought forth is more than reasonable,” said Plymouth City Council member Ned Carroll. “They’ve gone to great lengths to accommodate the neighbors around there. It’s extremely low density. They could make a lot more money. They were chosen because the Deziels recognized their heritage in this area.”

The majority of the city council ultimately decided against changing the land-use designation. A supermajority, or 5/7-vote, would have been required to change the guiding. Four council members – Jim Willis, Alise McGregor, Jim Davis and James Prom – were against the land-use change to allow the 229-unit housing plan. A final vote will take place at a future meeting because the city attorney needed to prepare findings of fact that puts in writing the reasons for denial.

“This is not a decision I’ve come to very lightly, I can assure you,” said Willis. “I personally feel that the developer’s proposed use here is really in conflict with sound planning.”

“Nothing in the past 16 months has changed my mind about green space,” said Davis, who also supported the decision against reguiding the land to allow the homes.

“I don’t think it’s fair to keep bringing up the uses of the PI when I don’t believe you have access,” said McGregor.

Another council member, Jim Prom, brought up what more development could mean for nearby schools.

“We have the largest high school in the state of Minnesota,” said Prom. “We’ve got to find a better way to develop this for something else.” 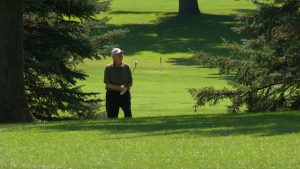 Plymouth city leaders also questioned whether the city could put itself at any legal risk for denying the Hollydale project. Council member Ned Carroll referred to a 2007 case that pitted a developer against the city of Eagan that eventually wound up in the Minnesota Supreme Court. That case also involved development of golf course land.

“There are similarities in this case than with the city of Eagan,” said Carroll.

Plymouth City Attorney Soren Mattick said both parties eventually settled out of court and the Eagan land was developed.

“One of the things the developer has to decide is, is the best path forward litigation? Or is it crafting a different application?” said Mattick, referring to the Plymouth situation.

“We’ll see where it goes, we’ll see if there’s any litigation,” said Wosje.