Marches have been an all too common sight around the Twin Cities this summer. But a rally in Plymouth Monday afternoon had nothing to do with equality or police reform.

Instead, a passionate group of roughly 130 people gathered to voice their support for preserving the shuttered Hollydale Golf Course as green space.

“We have a petition signed by over 8,000 people, over 2,300- 2,400 that are from the city of Plymouth, to send a clear signal to the city council that their constituents, their voters, care about saving the last large tract of land, green space, natural habitat, and golf course,” said Paul Hillen of the Preserve Hollydale Committee. “It’s the only 18-hole golf course left in Plymouth.”

Hillen organized Monday’s rally, where like-minded individuals made their voices heard about not wanting the golf course to be converted into more than 300 single-family homes.

“There has been so much building in the Plymouth area that, you know, it’s just time to say enough is enough,” said Becky Hsu of Plymouth.

Tuesday night, many of those same people voiced their opinions directly to the Plymouth City Council during a special meeting about whether the city should buy the Hollydale site for an estimated $25 million. 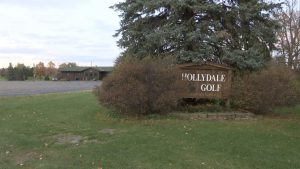 The Hollydale Golf Course in Plymouth closed in 2019.

“Tonight we’re here for one purpose,” said Plymouth Mayor Jeff Wosje. “And that is to listen to our citizens, our residents’ input regarding the potential purchase of the Hollydale Golf Course.”

“I’d ask the city to consider this as an investment,” said Adam Hosfield, a Plymouth resident. “Meaning that if we do whatever we have to, to get this done and purchase it, run it. In 10-15 years if it doesn’t work, you can always sell it then.”

“We would not be in this discussion if those residents hadn’t stirred the pot and proposed golf courses or open space or whatever it might be so that they would have their open space, nice back yards,” said Alan Napier, a Plymouth resident.

If the city were to buy Hollydale, the city would have to decide whether to keep it as a golf course. If that doesn’t happen, the city could decide to convert the property into some sort of recreational space. A third question is whether a bond referendum would be needed to make it happen.

“Personally I’m in favor of having a question on the ballot in November,” said Plymouth City Council Member Jim Willis.

Ultimately, the Plymouth City Council decided not to vote on whether to buy the property Tuesday night. Instead, they opted to table the issue to the July 28 council meeting.

Between now and then, Plymouth Mayor Jeff Wosje asked the council to review all of the information and take the residents’ concerns into account so they can make a more well-informed vote.