It’s a key focus for Brooklyn Center residents: the future of the community center. Now the city is taking steps to move forward on a $55 million plan that would renovate and expand the facility.

An analysis by design firm Perkins&Will showed the community center is outdated and not meeting the needs of the city’s younger population. U.S. Census data show Brooklyn Center is much more diverse and younger compared to Hennepin County overall.

The Brooklyn Center City Council approved a master plan study for a renovation and addition that would nearly triple the size of the existing community center. The city did look at building an entirely new facility, but those options were not considered financially feasible.

A renovation and expansion would be done in three phases that would increase the building size to 112,000 square feet. The first phase includes building a new 50-meter pool that could be used for swim meets. The current one would be demolished.

A teen center is also part of the first-phase renovations. The initial project would include remodeling about 15,000 square feet on the first level and another 8,400 square feet on the second level combined with a more than 30,000-square-foot expansion. Construction is targeted for 2023 and expected to last two years.

A second phase would build an addition for indoor courts used for basketball, volleyball and other hard surface sports. A second-floor walking track and fitness area would also be part of this phase. Second-phase construction is pegged to start in 2025.

A third phase would eventually include an outdoor splash pad and recreation pool. 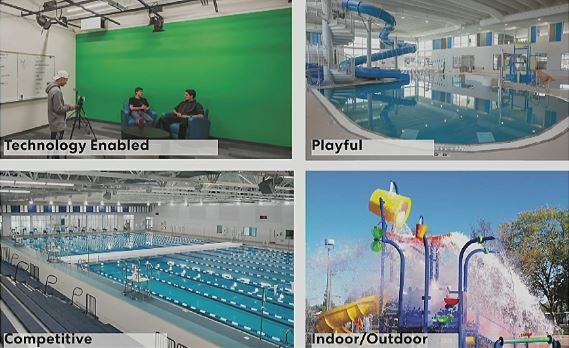 ‘A lot to like’ in Brooklyn Center Community Center revamp

“Because we’re somewhere around approaching 70 percent people of color in the city and so many different cultures are represented here, I think we have an opportunity to think broadly outside the box in terms of what a community center is,” said Elliott.

One key question is how the project gets paid for.

The city is working on options. Those include legislative help through a state bonding bill. A voter referendum on whether to approve a local sales tax for the project is another possibility.

If those options can’t be obtained, the project would likely not move forward, said Brooklyn Center City Manager Reggie Edwards.

Mayor Elliott also commented on how the facility wouldn’t necessarily accommodate kids who enjoy soccer, a sport that he says thrives in the diverse city.

“They really want to know about soccer, in particular,” said Elliott. A consulting firm’s outreach efforts addressed that question, saying there wasn’t much community feedback in support of an indoor turf facility.

“Most of it was really focused on being outside and recreating in the existing park space, and not a real call or vocal desire expressed for indoor turf,” said Lindsey Peckinpaugh with Perkins&Will.

Elliott did say that he thought “there’s a lot to like about this plan.” Brooklyn Center City Council member April Graves, who said she uses the facility two to three times a week, agreed.

“It gets to a lot of the things I heard community members say they wanted,” said Graves.

You can view the full community center discussion here under agenda item 9b.