On Tuesday night, the Osseo School Board passed a gender inclusion policy that is intended to ensure that every student has access to programming, activities, and facilities, regardless of sexual orientation or gender identity.

Before the meeting, a group in support of the policy rallied outside of the school district office.

“The policy is lengthy, but the primary goals are for our scholars so they can use names and genders in which they identify. They will be able to access the facilities that match their identity and they will be able to participate in the extracurriculuars that match their identity,” explained Jess Stewart, an educator in the district who was in support of the policy. “This really isn’t just a personal agenda or a board item. This is something that impacts our scholars and our community. As LGBTQ folks, gender non-conforming and non-binary, we make up this district. We are here to say see us and we support this policy.”

The policy included nine statements that range from allowing a student’s pronouns to be changed on digital systems to allowing a student to be able to participate in the sport or intramural activity that is consistent with their gender identity.  Read the full policy here.

Stewart and a number of community members shared opinions during the meeting about the policy. Most spoke in a favor of the policy.

Before the vote, board chair Kelsey Dawson Walton acknowledged she’d heard a lot from the community about the policy.

“I just want to say we want each and every one of our students to be accepted and to feel good when they walk through our doors,” said board chair Kelsey Dawson Walton, who voted in favor of the measure.

The board members who voted against the policy said there wasn’t enough public input and parts of the policy in regards to implementation were unclear.

Heather Douglass called the policy “politically motivated” and said that evidence does not back up the claims that students are unsafe in schools.

“I am profoundly concerned about the massive discrepancy in what staff indicates as a significant problem that’s prolific in our school system and the lack of evidence supporting that. To me, it feels like we have an un-reporting problem if this is an issue facing our community,” said Douglass.

Tanya Simons also voted against the policy, saying it did not feel “consistent, transparent or clear.” 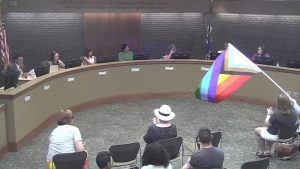 Photo from July 20 School Board Meeting.Watch the full meeting here.