The Osseo-Maple Grove American Legion collected food, toys and clothing in a drive last Saturday. The food went to CROSS in Rogers and the toys and clothing went to the Osseo Area Schools to go toward the district’s homeless population.

“It makes me feel good,” said Tom Olson, past post commander for the Osseo-Maple Grove American Legion, Post 172. “A lot of people have a good heart, came out, times are tough, so it makes you feel good.”

The Legion opened their doors at 9 a.m. on Saturday, Dec. 19 and collected items all day. In the end, they collected 464 pounds of food to donated to CROSS in Rogers, plus what’s described as a “trailer-full” of items for Osseo’s homeless student population.

“I hope that we can be a community and be giving and thankful and friendly to everybody,” said Elizabeth Booth, a volunteer who helped organize the drive. “Just because it’s not the holidays doesn’t mean people aren’t in need of everything.” 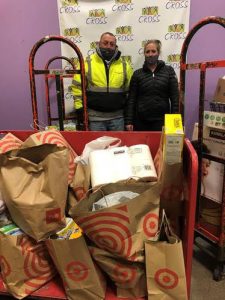 Volunteers with donations of food collected at the Osseo-Maple Grove American Legion.