Local police departments and businesses in the northwest metro are finalizing security plans ahead of the trial of a former Minneapolis police officer charged in the death of George Floyd. Jury selection for the trial of Derek Chauvin begins Monday with opening arguments scheduled to begin March 29.

Both the Brooklyn Center and Crystal police departments will increase officer presence within their communities during the trial and afterward.

“They aren’t able to take any time off during certain weeks, making sure we add additional staff to our roads,” said Crystal Police Chief Stephanie Revering on her city’s situation. 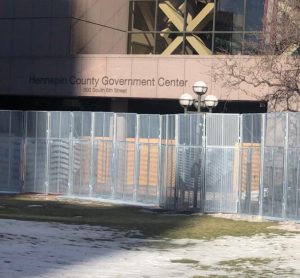 Since George Floyd’s death, people from all walks of life have called for racial justice and police reform. Rallies took place this summer in Brooklyn Park and on a pedestrian bridge over Interstate 394 in Golden Valley. Gatherings were also held in Maple Grove, Plymouth and Robbinsdale.

While most of the protests were peaceful, rioting and looting took place in some northwest suburbs. Businesses at the Shingle Creek Crossing retail area in Brooklyn Center were damaged. The Max It Pawn shop in Crystal was vandalized during the unrest.

Law enforcement agencies are hoping to avoid a repeat.

“Right now, we have no known credible threats as far as any protest, any looting,” said Cmdr. Garett Flesland with the Brooklyn Center Police Department.

Brooklyn Center and Crystal have mutual aid agreements in place with neighboring cities to ensure they have a backup if needed. Officials are also reaching out to local businesses asking them to be vigilant and mindful of what happened before.

“Get all your cameras up and running, and make sure all the lighting around your businesses is working,” said Revering.