Many businesses in cities across the northwest metro are cleaning up after looting and damage to property on Thursday night. Reporter Pafoua Yang captured the damage in Brooklyn Center. Meanwhile, businesses had break-ins and damage in Crystal, Maple Grove and Robbinsdale. The incidents happened after continued unrest and rioting that local police say stems from the death of George Floyd, a black man who died when he was pinned to the ground by Minneapolis police officer Derek Chauvin.

In Maple Grove, police responded to three separate business burglaries, including Nordstrom Rack in The Shoppes at Arbor Lakes area. In all three cases, officers made arrests. The cases remain under active investigation and charges are pending. 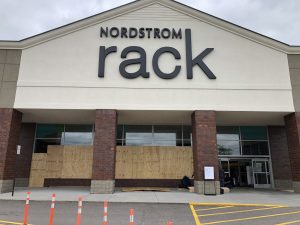 “We are also working with our regional law enforcement partners to prevent this type of crime,” said Wetternach.

Several miles away in Crystal, there were at least two incidents. Looters broke into Max It Pawn Shop. On Friday, crews were busy boarding up windows. A manager says they hope to reopen soon. 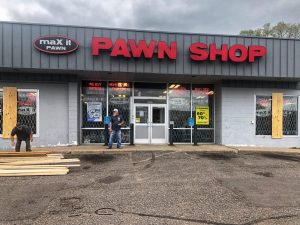 “I’m a little surprised that it came out this far. I’m concerned at how widespread this has become,” said Crystal Mayor Jim Adams. “We’re a tight-knit community. There are a lot of outside forces that are coming in, and it’s very difficult for us to sort through this and not knowing who is doing what.”

Vandals also tried to burglarize Crystal Wine and Spirits. They broke a window but were unable to get in.

“We have beefed up our police presence in the city over the last couple of days, simply because we want to deter people from doing a criminal activity, “said Assistant Police Chief Brian Hubbard. “We’ve had a high visible presence in our business area and neighborhoods.”

Crystal police say they plan to have the extra patrols and added staff for the next few days.

Security Beefed Up in Robbinsdale

Right up the road in Robbinsdale, businesses were also targeted. Crews were busy installing boards on the Dollar General store after windows were broken. Workers at the scene said they weren’t sure if any items were taken from the store.

Robbinsdale Wine and Spirits, which is next door to the Hy-Vee, was also hit. Shattered glass could be seen on the sidewalk as workers rushed to put up boards. A manager says they hope to be open in the next day or so. 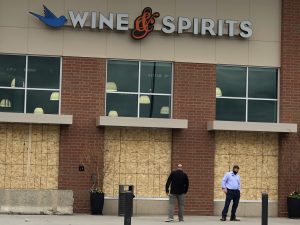 Robbinsdale Wine and Spirits Liquor is boarded up after vandals broke windows.

Robbinsdale police say they are beefing up patrols. A squad was parked outside Bill’s Gun Shop and Range.

According to Robbinsdale police Capt. Patrick Foley, there will be extra staff and patrols this weekend.

Brooklyn Center police have received quite a few calls from local businesses.

“What’s really sad is a lot of businesses in Brooklyn Center are small businesses and they are just coming back and figuring out how to operate after COVID-19 and now this,” said Commander Garett Flesland. “It’s a very fluid situation. Hopefully everyone can take a breath and stay safe.”

Meanwhile, officials in Plymouth say there were no incidents in the city, but they tell us a plan is in place to keep the community safe.

The Osseo Police Department says it will also add extra staff and patrols to keep the city safe. So far Osseo reports no damage.