At least 10 businesses in Brooklyn Center were damaged by looting and burglaries overnight Thursday into Friday morning. The looting is part of many instances of property damage that have occurred across the Twin Cities following the Minneapolis death of George Floyd, who is African-American, after he arrested by a white Minneapolis police officer.

Residents believe that destruction is not the way to go.

“It’s outrageous that they’re tearing up everything in the city. That’s not going to solve anything,” Riley Woodard said. 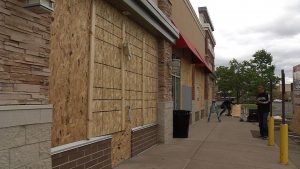 Businesses across Brooklyn Center closed their stores early Friday because they anticipate the continuing protests.

“This is where we have to shop you know? The elderly,” Woodard said.

“I want to go to Walmart real bad right now, but I can’t,” said another resident.

Disappointed by the Brooklyn Center looting and destruction, some are fearful to come out of their homes.

“My daughter was afraid to come over for supper last night because she was afraid there might be shooting somewhere,” explained Sandra Kenyon.

“People have a right to voice their displeasure and frustration,” said Brooklyn Center Police Commander Garett Flesland. “But we need to all do it in a healthy, responsible, respectful way to hopefully move in a good direction.”

Residents say it’s time to unite in a peaceful way.

“It’s going to require a lot of cooperation among the neighborhoods,” said Kenyon.