A community meeting held Sept. 9 passed out a flyer showing the outline for a future Department of Community Safety & Violence Prevention. But at a virtual work session on Sept. 1, Brooklyn Center City Manager Reggie Manager already had revealed that such a plan “would not
be within the realm of reach for Brooklyn Center financially at this time.”

The discussion continued at Monday’s city council meeting, which further revealed that the Daunte Wright and Kobe Dimock-Heisler Community Safety and Violence Prevention Resolution approved last May would take years to fully implement. Wright and Dimock-Heisler were two young men shot and killed by police.

“I don’t think that it’s fiscally in the near future, fiscally, reasonable or possible to add on to the existing budget for three departments in the near years, Mr. Mayor and council members,” said Edwards.

Satisfying ‘Spirit of the Resolution’

Edwards said his plan to create a new division called the Office of Community Prevention, Health & Safety would satisfy the “spirit of the resolution.” The new division would cost $154,000 and include the hire of a person at a managerial level to coordinate efforts among departments with a specific focus on the police and fire departments. That person would report to the city manager.

The new division would help oversee two-year pilot grants creating civilian response teams for mental health distress calls and non-moving traffic violations. The city is also in the process of accepting applications for the new Implementation Committee to help advise on the planning process. That committee will include the appointment of a project manager, who would report to the mayor.

The budget would not create the Traffic Enforcement Department and Community Response Department at this time. According the resolution approved last May, those two new departments, as well as the police and fire departments, would have fallen under the proposed Department of Community Safety & Violence Prevention.

Mayor Elliott has mentioned this process is a “bold step” toward transforming public safety. At Monday night’s meeting, he mentioned support for funding the entire resolution.

“I think it’s important too that this budget funds the resolution,” said Elliott. “The whole world is watching us.”

Edwards said funding three new departments under the resolution would lead to eliminating other city departments. But Elliott said he expects the city council to take a “deep dive” into the budget over the coming weeks. Other city council members expressed approval of where they were at in the process.

“I’m optimistic that we can achieve the spirit of this effort without imposing structure that may be inefficient, ineffective and overly costly for our city,” said Brooklyn Center City Council member Dan Ryan.

Ryan approved last May’s resolution, but said he had reservations about it. Council member Kris Lawrence-Anderson was the lone no vote against the resolution. At the time, she expressed concerns about how quickly the resolution was passed.

“Rome wasn’t built in a day. I understand the spirit in which the resolution was passed,” said Lawrence-Anderson at Monday’s meeting. “We’re making strides. It’s not as expedient as some would like.” 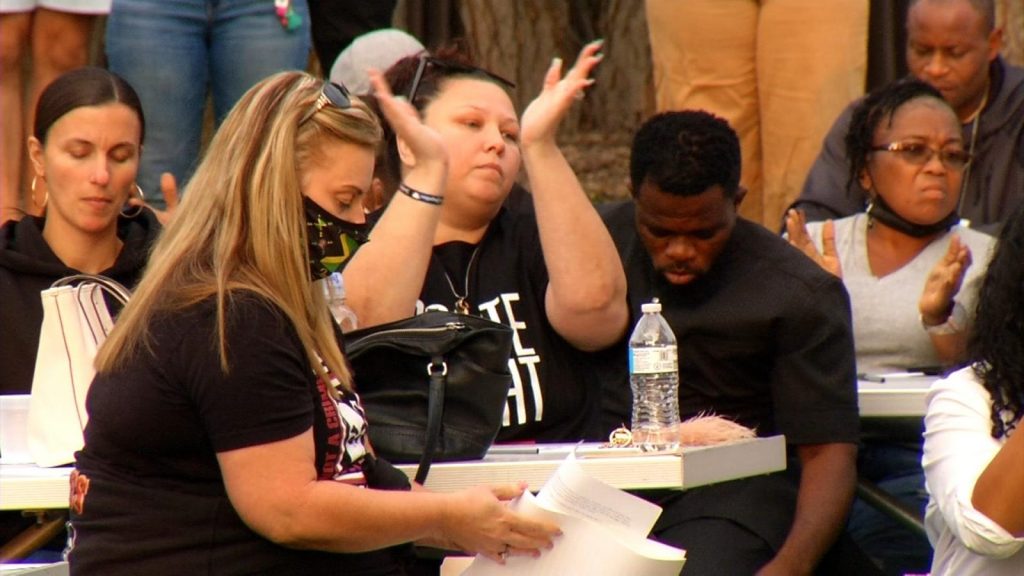 ‘They Don’t Want Me Talking’

Amity Dimock, mother of the late Kobe Dimock-Heisler, spoke briefly during Monday’s meeting. She expressed displeasure that she wasn’t allowed to speak following the budget presentation.

“They don’t want me talking about my displeasure,” she said during the virtual meeting

The preliminary budget was a discussion item and didn’t require the city council to hold a public hearing. That hearing will be held at the Sept. 27 meeting. Council member April Graves said she wanted the meeting to move along and offered to hear from Dimock at a different time.

“What would happen if somebody dies in that time frame. Can you tell me that?” said Dimock. “We will talk to the news instead.”

The Brooklyn Center budget, as currently proposed, would decrease property taxes by about $20 dollars on the median valued home of $223,000. City officials attributed a decrease in the city’s tax rate largely to the decertification of a tax-increment-financing (TIF) district, a public financing tool used to help fund redevelopment.

According to city leaders, besides public safety reform, targeted redevelopment is another top funding priority. That includes continued efforts to redevelop the former Sears and Target stores and the city’s so-called “Opportunity Site.” That site is 81 acres of land bounded by Shingle Creek Parkway, Bass Lake Road, Highway 100 and Summit Drive North. The city owns about 35 acres of that land.

A final budget would be adopted in December.