Every once in a while, people get a craving for something sweet. Since 2012, Nadia Cakes in Maple Grove has done its part to fulfill those guilty pleasures by providing more than 200 unique flavors of cupcakes.

“I think people are so loyal to us as a brand, which has been so amazing to see over this really, really hard year,” said Abby Jimenez, owner of Nadia Cakes. “But I mean, who doesn’t love a cupcake? And I think people are leaning toward comfort foods during this stressful time.”

Jimenez is the award-winning mastermind behind the Nadia Cakes brand. The dessert market has certainly been a successful career endeavor for Jimenez, however, she’s much more than a cupcake queen.

Jimenez also happens to be the bestselling author of a series of romance-comedy novels. Life’s Too Short, her third novel, came out April 6.

“I’m very excited for everyone to read it,” Jimenez said. “It’s got a starred review from Publishers Weekly. It’s been getting the highest acclaims. I think it made Oprah’s list of most anticipated books this spring. It’s an Amazon pick of the month.”

Not bad for someone who simply wrote for fun and never actually had a goal of getting published. 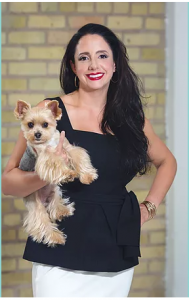 Abby Jimenez has operated Nadia Cakes in Maple Grove since 2012.

“I did not have a background in writing,” she said. “I didn’t have really any foot in the door in the publishing world. And I just did what felt right to me, and I think that was a very fresh take for a lot of people.”

Each of Jimenez’s books contain romance, a touch of reality, and her trademark sense of humor – something that her growing fan base has grown to love.

“They’re hilarious, No. 1,” said Mikie Bodnar, a Nadia Cakes customer from Maple Grove, when asked what she likes about her books. “They’re totally relatable. It makes you want to be in a relationship, like, brand new again, and she’s just a really good romantic writer.”

Nadia Cakes customers aren’t the only people who feel that way.

A book adapted to the big screen?

Each of Jimenez’s books have been picked up by the production company, Thruline Entertainment, and the team is currently working to adapt her second novel, The Happy Ever After Playlist, into a major motion picture.

“It is completely surreal and I am constantly shocked,” Jimenez said. “I’m shocked every day.”

Yet while Jimenez may be shocked at her literary success over the past few years, loyal Nadia Cakes’ customers are just excited about their neighborhood celebrity.

“Just the fact that she lives in Maple Grove, and I live in Maple Grove,” Bodnar said. “Her daughter and my daughter go to the same school. They don’t know each other, but it does feel like you can really do anything. It’s pretty cool.”

Signed copies of Life’s Too Short are available at Nadia Cakes, along with special strawberry guava cupcakes.