It’s been nearly two weeks since the Food and Drug Administration approved emergency use of the one-shot Johnson & Johnson vaccine.

Now, Minnesota’s top health official is on a mission to show people that if you have the option to get the Johnson & Johnson version, you should take it as soon as it’s your turn in line.

Commissioner Malcolm was in Golden Valley Wednesday afternoon to get the Johnson & Johnson shot at Courage Kenny Rehabilitation Institute.

Malcolm says she could have gotten vaccinated earlier this year. However, she wanted to wait so that other Minnesotans who are more at-risk could get vaccinated first. 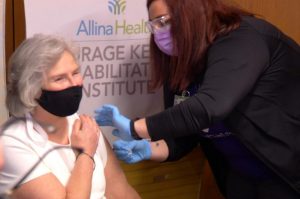 Some people have raised concerns about the Johnson & Johnson vaccine because it’s 85 percent effective in preventing severe illness, versus the 95 percent efficacy rates with the Pfizer and Moderna versions.

However, she notes that clinical trials show it’s 100 percent effective at preventing hospitalization and death.

“And I know folks have had questions about whether this vaccine is as effective as the others,” Malcolm said. “And you’ve heard public health officials say it is extremely effective, especially where it matters most in preventing severe illness, hospitalization and death.”

As of Wednesday, Minnesota has received more than 56,000 doses of the Johnson & Johnson vaccine.

Meanwhile, President Biden announced Wednesday that the federal government is purchasing another 100 million doses of the Johnson & Johnson vaccine. No word yet on when exactly those doses will become available.