A Golden Valley brewery is celebrating fall with a German-style festival this Saturday, Oct. 3. Under Pressure Brewing, located just north of Highway 55 off of Boone Avenue, is hosting OctoBeerMeatFeast. One of the highlights is a meterwurst eating contest (39.4″ of sausage in case you’re wondering). 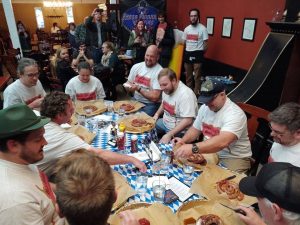 Festivities start at 1 p.m. Contestants for the meterwurst competition must pre-register for the event at the brewery, as limited spots are available. It’s a $25 donation to participate. All proceeds will benefit Cornerstone, which provides services to victims of domestic violence. Besides a belly full of delicious wurst donated by Nelson’s Deli, all contestants receive a custom event t-shirt.

Under Pressure Brewing is also releasing two new beers this weekend, a märzen (Bavarian-style lager) and a hazy IPA. Portions of the sale of the hazy IPA benefit the “The House That Beer Built” project by Twin Cities Habitat for Humanity. Big Daddy’s Rockin Q Texas-style barbecue food truck will be there. There will also be live music and games, including drachenpfund, Under Pressure’s version of hammerschlagen, a hammer the nail-type game.

Like other taprooms and restaurants, Under Pressure Brewing remains operating at 50% capacity due to COVID-19 restrictions put in place. The business removed half of its tables to make sure visitors are separated by plenty of distance. 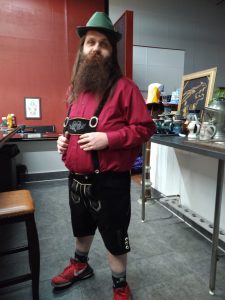 “Everybody thinks because you’re open, things are okay,” said Lori Ertl, co-owner of Under Pressure Brewing. “But you’re never going to make up those four months of revenue that you lost,” she said referring to the initial business restrictions where it was only allowed to do curbside pickup of its growler and crowler sales.

Under Pressure is taking in about half the revenue it normally would, said Ertl.

“With winter coming, who knows what it’s going to be for business,” she said.

The Golden Valley brewery and taproom continues to take reservations for tables and sanitizes all its surfaces with a disinfectant. That’s not to mention social distancing its customers, who are required to wear masks when entering the facility.

“We’re doing everything by the book,” said Ertl. “It’s still hard, and we’re trying to get back to normal, but it’s a new normal.”