For nearly 20 years, customers have made their way to a strip mall along Main Street in Maple Grove for authentic Thai cuisine from Sawatdee.

“The red curry, man. It’s the best,” said one customer.

It’s high praise for a local restaurant chain that bills itself as being the first Thai restaurant in Minnesota.

“We have a full menu of almost 80 items,” said Cyndy Harrison, owner of Sawatdee. “We have fried rice, we have great appetizers, we also have sushi at this location only, and so that’s available just in the evenings.”

As retail establishments have come and gone along Main Street over the years, Sawatdee has remained a constant presence since opening in Maple Grove in 2002.

In addition to good food, Harrison credits their ability to adapt.

“We just kind of move with the times and adjust as needed, and that’s really what you need in the restaurant business,” she said.

But after all these years, Harrison never would have predicted they’d adapt quite like they have over the last couple of months.

Like much of the restaurant industry, Sawatdee has felt the impact of the nationwide labor shortage.

So to help take some of that pressure off staff, Harrison listened to a sales pitch from a robotics company and brought in DeeDee, a server-assist robot.

“[The robot] helps bring food out and then she also just does miscellaneous things like, if we visit a table and they ask for the check or they ask for extra silverware or something like that, then we can just put that right on her and she can come out and the customer can just grab it themselves,” Harrison said. 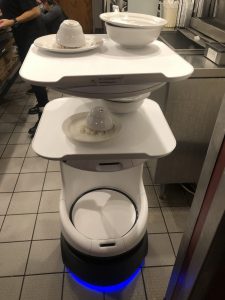 DeeDee loosely translates as “very good” in the Thai language.

DeeDee made her big debut in September. She’s already become a fan favorite.

“I thought it was pretty cool,” one customer said. “Kind of like the movie Wall-E.”

“I’ve seen stuff like this on TV or videos before but never in real life, so I thought it was pretty cool,” said another customer.

Sawatdee will have a robotic helper in the Maple Grove and Minneapolis locations for at least the next three years. But make no mistake, DeeDee is no replacement for the real thing.