The Maple Grove City Council is expected to vote Monday on whether to approve a first-of-its-kind rental townhome concept in the city.

The development called Summerwell is in far northwest Maple Grove, north of Highway 610 and west of Maple Grove Parkway. The project, proposed by Greystar Development, would include 220 single-family rental townhomes with a mix of two, three and four-bedroom units.

Rents would range on average from $2,500 a month for a two-bed unit to $3,000 a month for a four-bedroom townhome. Amenities would include a clubhouse, outdoor pool and nightly “valet” garbage service pickup. The project also includes a dog run and adding more trees than code requires. 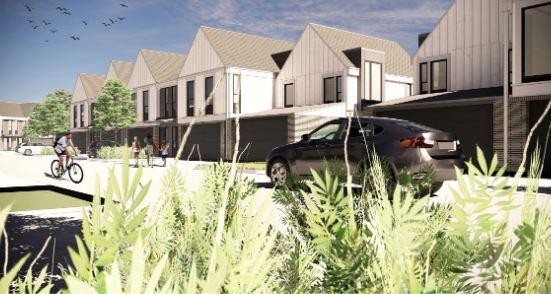 During the recent meeting, however, some commission members voiced concerns. While the unit density is consistent with the city’s comprehensive plan, commissioner Chuck Lenthe believed the project may be too dense.

“I’m still not pleased with the fact that it’s as dense as it is,” said Lenthe, during the Jan. 31 meeting. “There’s only 40 feet that’s between what I believe are called the fronts of the units. There are patios and sidewalks, public area, all of which doesn’t provide a lot of space for individual residents to enjoy an afternoon break.”

The unique garbage pickup arrangement also raised a concern, since residents would possibly leave bags outside daily that could attract wildlife. The reason for such an arrangement is to eliminate containers that would consume garage space. Longtime commissioner Craig Lamothe said he couldn’t recall such a system used before in Maple Grove.

Commissioner Mike Ostaffe also brought up that the city should prepare for similar townhome developments in case more come up for approval.

“Is this something we want to continue to have in Maple Grove? And, if so, what do we have to do to manage that properly,” said Ostaffe.