After three decades on the job, Plymouth Police Chief Mike Goldstein signed off from duty on Thursday. Before a crowd of well-wishers that included former mayors, city managers, Hennepin County Attorney Mike Freeman and others, Goldstein thanked coworkers and reflected on his career. Reading an officer’s badge and “signing off” is a tradition in the law enforcement community.

You can listen to the audio clip here: 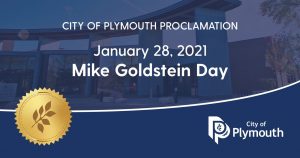