The city and local athletes cut the ribbon on a new cricket pitch in Boundary Creek Park last Saturday. Less than a week later, vandals cut part of the turf out of the pitch to create enough damage that staff call it “severe.”

A new piece of turf is about $10,000. The city is working with the police department on next steps.

The cricket pitch has been controversial. Neighbors spoke at a city council meeting against the change when the pitch was proposed, expressing parking and traffic concerns. Then, there was minor vandalism during the construction process in the spring and summer.

Maple Grove Police put up a temporary security camera during construction, which stopped the vandalism. The recent vandalism incidents happened after the camera was taken down. 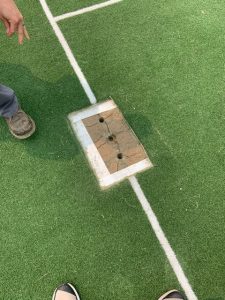