Kim Potter Takes Stand, ‘I’m So Sorry, I Didn’t Want to Hurt Anybody’

Potter said she was field training officer Anthony Luckey, who wanted to pull over a white Buick. In prior testimony, Luckey said he observed the Buick turn on a right turn signal in a left-turn lane.

When asked if she would pull over the vehicle for a dangling air freshener and expired tabs, she said, “most likely not.” If was Luckey’s call to pull the Buick over because he was field training.

Defense attorney Earl Gray had Potter describe what she saw.

Sgt. Johnson was the third officer at the scene on the passenger side of Daunte Wright’s vehicle.

“And you knew Johnson from many years before this? Is that right?” asked Gray.

Gray asked, “And by looking at his face at that point in time, what did you interpret it to mean?”

“He had a look of fear on his face. It’s nothing I’ve seen before,” said Potter visibly shaking.

Asked Gray, “Did you say anything when you saw this?”

“We were struggling and were trying to keep him from driving away. It just went chaotic. And then I remember yelling Taser, Taser, Taser. And then nothing happened. And then he told me I shot him.”

Potter resigned from her job a couple days after the shooting.

Asked why she quit, “There were so many bad things happening, I didn’t want my coworkers and then I didn’t want anything bad to happen to the city,” said Potter, visibly crying.

During further testimony, Potter couldn’t recall the immediate aftermath of the shooting in which Potter could be heard on bodycam footage saying “Oh my God” and “I’m going to prison.”

“They had an ambulance for me and I don’t know why, and I was at the station. I don’t remember a lot of things afterwards,” Potter said.

Gray asked, “Do you remember saying something about prison?” 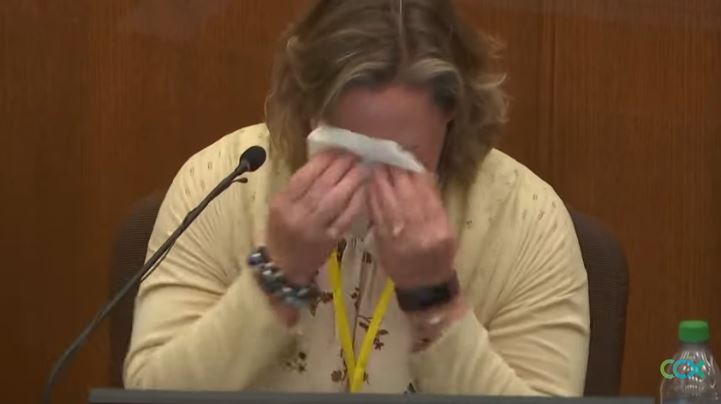 Potter described moment of the shooting.

During cross-examination, Minnesota Assistant Attorney General Erin Eldridge kept pressing Potter as the former officer broke down on the stand, accusing Potter of failing to do her duties after she fired the fatal shot.

Eldridge asked, “After you shot Daunte Wright, you didn’t behave like someone who had just saved Sgt. Johnson’s life, did you?

“I was very distraught. I just shot somebody. I’ve never done that,” cried Potter.

“You didn’t say that right?”

“You stopped doing your job completely,” said Eldridge. The prosecutor then asked, “You didn’t run down the street and try to save Daunte Wright’s life, did you?”

“You didn’t check on the other car that had been hit, did you?”

“That all happened just down the road from you?”

“You were focused on what you had done because you had just killed somebody.”

“I’m sorry it happened,” said Potter crying. “I’m so sorry.” She then said after further pressing from Eldridge, “I didn’t want to hurt anybody.”

The exchange led to an objection, which was sustained by Judge Chu. 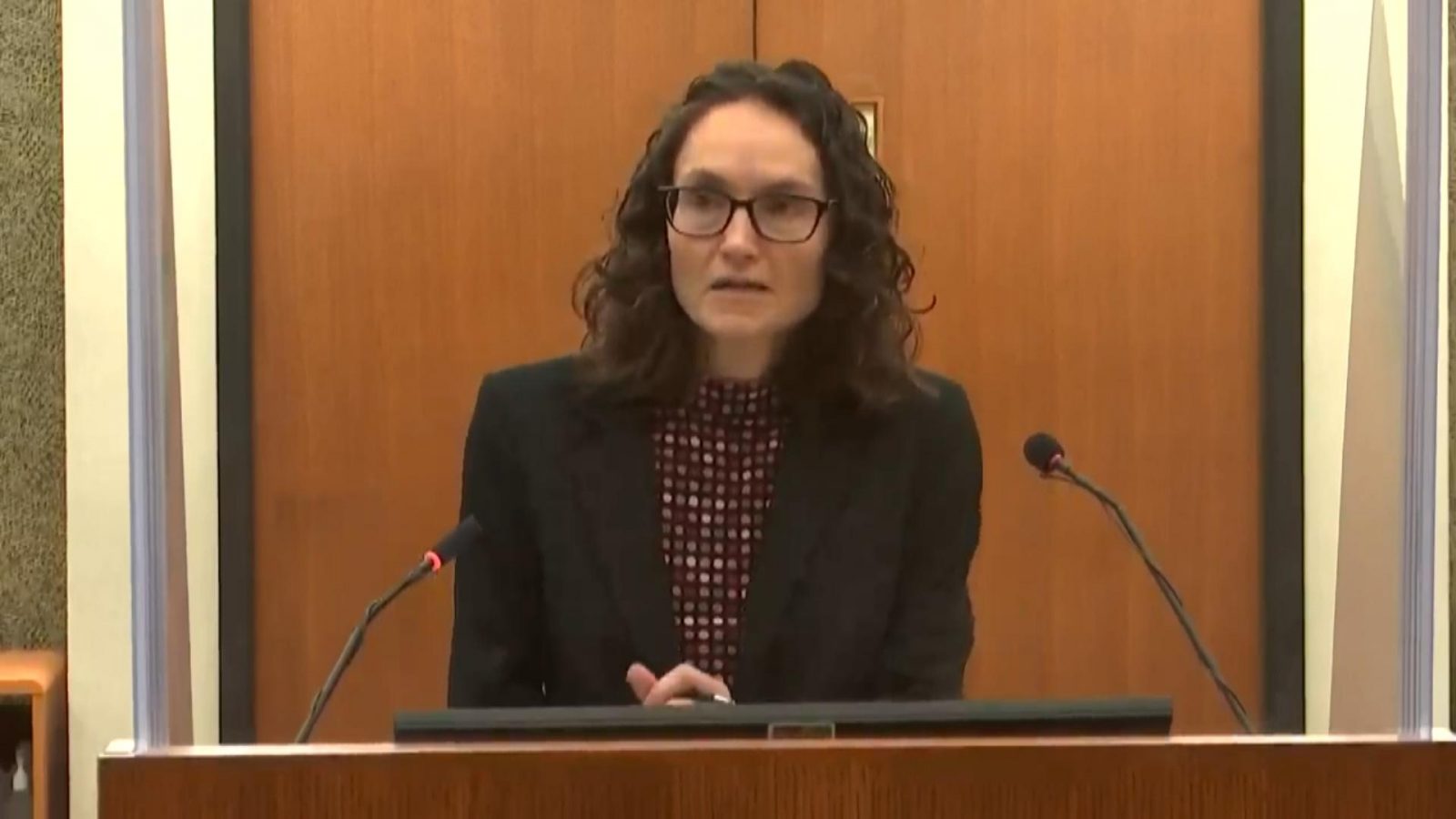 Potter ‘Enjoyed Work in the Community’

Potter’s husband, Jeff, was in the courtroom as well her elderly mother and a brother. She revealed her father was deceased.

Potter attended school at Totino-Grace in Fridley and interned with the Columbia Heights Police Department. She graduated from St. Mary’s College in Winona with a degree in criminal justice.

When asked why she didn’t seek a promotion in the Brooklyn Center Police Department, the former officer says she didn’t want to take on administrative duties because she “enjoyed work in the community.”

Potter started with the Brooklyn Center Police Department in 1995. Her duties included being a crisis negotiator. She also volunteered for LEMA, carrying the casket of fallen officers who were killed in the line of duty.

She testified she never received any complaints from the public. Potter said she attended all of her training.

The former officer owned a home in Champlin and had to sell to it. She testified that she has since moved out of state. 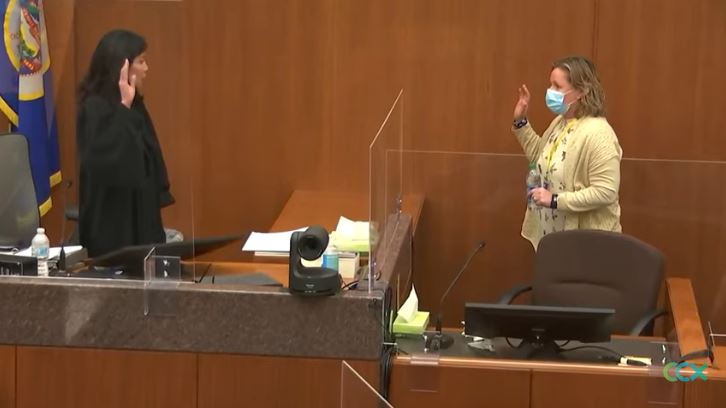 Dr. Laurence Miller, a psychologist from Palm Beach County in Florida, testified on what’s referred to as “slip and capture” or “action error.” It’s a concept used for automatically doing something routine when you intended to do something else.

Miller, 70, gave examples: Driving down the road only to realize the route you took was not your intended route. Or writing a previous year on a check when it’s now a new year. Or typing in an  old password instead of the new one.

Miller is a foremost expert on police psychology and is an adjunct professor at Florida Atlantic University in Boca Raton, Fla. He testified that he charges a flat rate to testify in cases. In this case he charged a flat $30,000 fee to the defense.

The psychologist said he reviewed video evidence and met with the defendant, Kim Potter.

Miller provided the “slip and capture” error concept in the defense of Potter, who says she accidentally grabbed her firearm when she meant to use her Taser, despite her 26 years of law enforcement training.

A published author on police psychology with 12 books on related topics, Miller says high-stress incidents can cause “action errors” to occur.

Critics have argued that Miller is wrong to apply psychological principles to incidents where police use lethal force because it’s based on shaky scientific ground. Prosecutor Erin Eldridge during cross-examination tried to characterize it as “junk science.”

“We like to believe we’re always in control of our actions, but most of what we do on daily basis really occurs on an automatic level,” testified Miller. “In fact we couldn’t function if that weren’t the case.”

Miller said if you had to think about everything such getting ready in the morning, “you’d trip over your own mental feet.”

The expert said hyper-focus is caused by “hyper-arousal” where everything else is tuned out but the source of danger.

“In order to do anything well you have to be a certain zone of arousal. In other words, you can’t be too laid back and chill and uninterested because you’re not going to have the motivation to do that skill well,” said Miller.

When that arousal turns to a degree of fear, agitation or panic, Miller said, “then it begins to degrade your performance.”

Miller said “weapon confusion,” said as mistaking a firearm for a Taser, is a subset of “action error.”

He said action errors are more likely to occur when a suspect attempts to flee. That’s when he said tunnel vision kicks in, and other things are tuned out.

“There’s no one thing that causes an action error,” said Miller, but he said it’s the result of cumulative forces.

Miller said these types of confusion errors have happened before in police work. He said it also applies to medicine for doctors who learn brand new procedures in life-saving situations, when a old procedure may be used.

During cross-examination, Eldridge asked “are officers trained to manage stress?”

“They often are and should be yes,” said Miller.

After the witness was allowed to step down from the stand and jurors could take a short break, Hennepin County District Judge Regina Chu held a brief conference with attorneys from both sides. Chu reiterated that no expert can testify that Potter, herself, experienced “slip and capture.”

According to prosecutors, there could be a rebuttal expert on the “slip and capture” issue, which will be dependent on Potter’s testimony. Prosecutors later said no rebuttal expert was needed. 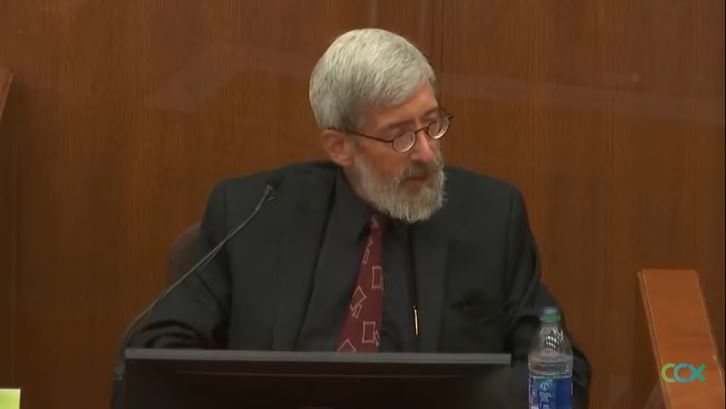 The defense rested its case after Potter left the witness stand. Afterward Judge Chu told jurors that all the evidence has been presented and gave them specific instructions about not discussing the case with anybody over the weekend. They were told court will reconvene Monday at 9 a.m.

After the the jurors were excused, Judge Chu met with attorneys from both sides to discuss jury instructions.

Following the meeting, Chu told the attorneys, “I’ve really enjoyed having you. It was a really well-tried case on both sides.”