2020 resulted in a troubling crime trend as police departments across the Twin Cities, including those right here in the northwest suburbs, saw spikes in violent crime. The city of Golden Valley wasn’t immune to the trend.

While overall calls for service were down last year in Golden Valley, the city did see an increase in “Part I” crimes, which are the most serious offenses. Those types of crimes rose 29 percent. Auto theft, aggravated assault and burglary were among the Part I crimes that saw significant increases.

What’s Behind Spike in Violent Crime?

So what was the reason behind the spike?

According to Golden Valley Police Chief Jason Sturgis, “there could be a variety of reasons for that.” That includes fewer people out and about due to COVID-19, which may embolden some criminals.

“Bad guys know that maybe there’s not as many people out. (That) might be easier to go to get to certain targets,” said Sturgis in a presentation this week to the Golden Valley City Council.

Sturgis says juveniles getting involved in gangs or a prolific criminal getting released from jail could also be factors.

The chief also acknowledged recent violent carjackings, which made headlines in Minneapolis, resulting in nearly 50 arrests. Sturgis says Golden Valley had three carjackings last year, all along the border. 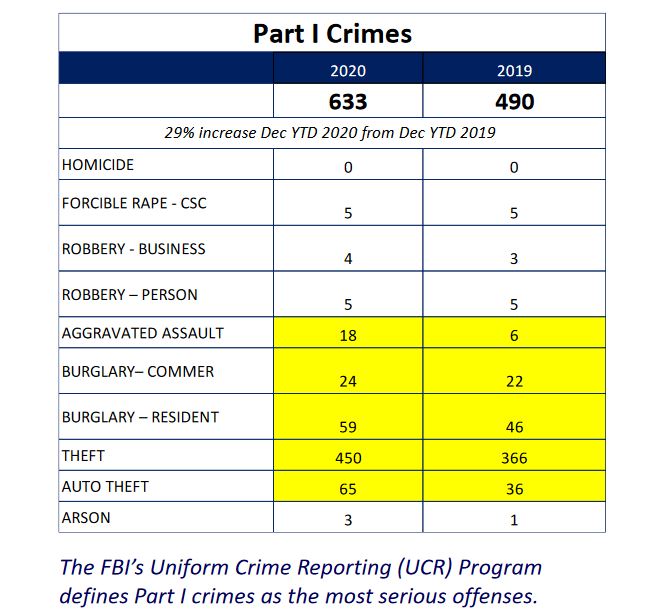 At this week’s city council meeting, Golden Valley police highlighted four cases that consumed significant resources, one of which is still an active case in which police are seeking a serial burlar.

On Feb. 12, Golden Valley police responded to an armed robbery at the Lunds & Byerlys liquor store. In that case, a suspect threatened a store clerk with a knife and stole cash. Surveillance video showed the suspect getting onto a bus in front of the store.

The suspect was arrested in Golden Valley on Feb. 25, police said. The arrest came after the suspect was spotted getting on the same bus.

In September, the Golden Valley Animal Hospital was burglarized over Labor Day weekend. Police say the burglary included the theft of a $25,000 laser used for closing incisions.

Golden Valley police believed the person responsible was also the culprit behind 30 to 40 burglaries across the metro, ranging from Lakeville to Medina. Police said the burglar targeted closed businesses, specifically eyeglass stores and bike shops.

“There was well over $100,000 in loss between these burglaries,” said Sgt. Randy Mahlen.

Golden Valley police partnered with Minnetonka authorities on the case. They eventually caught the suspect in the act burglarizing an auto parts store in Apple Valley, Mahlen said. The laser was recovered and returned to the Golden Valley Animal Hospital.

On Nov. 19, Golden Valley police responded to an armed robbery at the Holiday gas station at 600 Boone Ave. N. Police say the store was robbed at 2 a.m. by three suspects, two of which had firearms.

Police later learned other Holiday robberies occurred that same night, including one in White Bear Lake and another in Brooklyn Park, where a store clerk was shot. The shooting left the clerk paralyzed from the waist down.

A total of seven armed robberies occurred over a five-day period, police said.

“Our detectives did a ton of work on this case,” said Mahlen.

“We partnered with Brooklyn Park who was able to provide us with over 30 officers to execute three simultaneous search warrants and we were able to get all three of our suspects in custody, along with about 90% of the clothing that was worn during the robberies and in the social media,” said Mahlen.

Serial Burglar Still on the Loose

Golden Valley police also continue to look for a serial burglar believed to be responsible for as many as 40 cases. Mahlen said the burglar went into several businesses in Golden Valley, entering employee areas to steal purses and wallets. Mahlen said the suspect charged “thousands and thousands of dollars on credit cards immediately after.”

The burglaries included an office complex at 701 Xenia Avenue and at Courage Kenny Rehabilitation Institute. The crimes extended throughout the metro and involve a total of nearly 30 other investigating agencies, said Mahlen.

Golden Valley patrol officers nearly captured the suspect a month ago, but he fled at high speeds in a vehicle. Mahlen said police had to end their pursuit for safety reasons after he drove into a residential neighborhood.

“This has been a tough guy to capture, but we know who he is and it’s only a matter of time before we catch up with him,” said Mahlen.