Described by Golden Valley city leaders as “an emotional issue,” the city council gave the initial okay Feb. 16 to an ordinance change that would require pet owners to have their dogs on a leash when on public property.

The issue has long been discussed. In fact, Golden Mayor Shep Harris made it one of his 2020 goals. However, the COVID-19 pandemic delayed further discussion of any changes. Currently no dog leash is required on public and private property in Golden Valley if the pet owner is nearby and the animal responds to voice commands, said Golden Valley Police Chief Jason Sturgis.

Under the proposed ordinance, pet owners would have to use a leash for their dogs when at parks or on sidewalks. The leash is not to exceed 20 feet. When other people or pets are within 20 feet, that leash would to have to be shortened to no more than 6 feet long.

Another change is pet owners would be mandated to clean up excrement if their dog goes on public property or on a neighbor’s property.

There would also be new tethering requirements and new sign requirements for electric fences on private property. The full amended ordinance proposed can be found on page 31 of the city council packet. 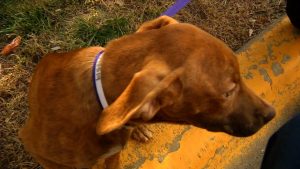 Golden Valley’s proposal would require no more than a 6-foot leash when other people and pets are within 20 feet.

Golden Valley hasn’t updated its animal ordinance in decades. But there’s community support for changes. According to a city survey of 646 respondents, 70% favored requiring leashes for pets in public spaces. Another 61% said that a maximum of 6 feet is an appropriate leash length when dogs are near other people and pets in public spaces.

According to Golden Valley City Manager Tim Cruikshank, the city does not require owners to tag or license their pets. He said that’s consistent with other nearby cities.