The latest chapter in the saga over the future of an unofficial beach in Theodore Wirth Park has Golden Valley city leaders expressing disappointment.

The beach has raised concerns of neighbors and the general public alike after reports of nudity and drug use arose last summer. The property on Twin Lake straddles the Golden Valley border, but is technically in Minneapolis and under control of the Minneapolis Park Board. The site has raised questions about jurisdiction and enforcement.

Park board members said some of the changes already took place and the memorandum is not needed. Read the full memo here.

However, Golden Valley Mayor Shep Harris said he was disappointed over the vote.

“It definitely was a surprise, and frankly, for the moment, disappointing,” said Harris. “It’s quite the setback. We’ve worked really hard with park board leadership and staff.”

Harris went on to say the council passed the memorandum of understanding two times, tweaking the agreement upon the feedback they’d received from park staff.

Harris says the city has already reached out to have some private conversations to move forward together. He hopes this summer will be better for residents who live nearby.

“We’re in a wait and see mode. Let’s see what happens down at this unofficial beach. Let’s hope the people who use the beach are more respectful of nearby neighbors.”

Beyond using a resolution team to help resolve issues between beach goers, neighbors and the governing bodies, the future of the beach is left up to the park board. 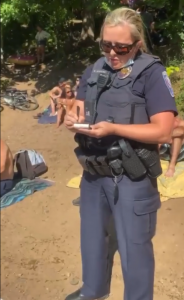 A police officer questions beach-goers in Theodore Wirth Park in 2020.