In the aftermath of the Taliban’s takeover of the Afghan government, thousands rushed onto the tarmac of the Kabul airport, desperate to escape.

For Tina Nguyen of Richfield, there’s an eerie similarity to the fall of Saigon that signaled the end of the Vietnam War.

“If you take those images and put them side-by-side with Vietnam is 1975, it’s incredible the resemblance,” Nguyen said. “And I wasn’t even born during the war, nor was I raised seeing the war directly, but I saw it in my grandmother and my mom.”

Nguyen came to the United States from Vietnam in 2002 through a student exchange program. Her grandfather was a doctor for the U.S. Air Force in the Vietnam war. He was killed in action in Laos.

Nguyen has his uniform and other priceless heirlooms, such as love letters he wrote to his wife. Her entire family was impacted in some way by the Vietnam War, which makes the events that unfolded in Afghanistan over the past few weeks that much more traumatic.

“I know for a fact that PTSD is… people who lived through the Vietnam War are reliving it now, because my mother just told me that,” Nguyen said. “She’s like ‘hey, I saw this. This is exactly what we went through.'”

During Nguyen’s nearly two decades in the U.S., she was unofficially adopted by Golden Valley residents Jim and Kathy Haglund. They celebrate important occasions with her, and they even helped bring her mom to the U.S. for her graduation from Augsburg University in 2008. 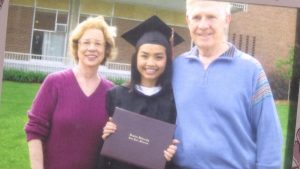 “I call them now pappa and mamma,” Nguyen said. “They are basically my American dad and mom.”

Now, much like how an American family helped her, Nguyen wants to help those affected by the Afghan war.

“Right now I want to support organizations who are supporting the Afghans in the country right now,” Nguyen said. “I also signed up for organizations here to host refugees when they arrive. So hopefully I get to do that.”

The war in Afghanistan may be over, but the aftermath will be felt for generations.

“When you feel helpless, help somebody,” Nguyen said.

Meanwhile, Nguyen is hosting a fundraiser at Mel-O-Glaze Bakery in Minneapolis on Sept. 4 from 12 p.m. to 2 p.m. All proceeds will go toward the Truman National Security Project.