Joanne Trangle says she wanted more out of life. So, several years ago, the Golden Valley resident left her commercial interior design job and started a nonprofit called Global Village Connect. The group aims to help people in Africa.

Joanne Trangle says she was motivated to help others after she adopted her son from Ethiopia 10 years ago.

“I decided nobody should have to give up their child because they can’t educate or feed them,” she said.

Trangle couldn’t work in Ethiopia for many reasons. Through some friends here in Minnesota, she launched Global Village Connect in Africa. In 2014, she started a school farm in central Uganda so the children could eat and attend classes.

“Often, these kids go to school with no breakfast. They have no lunch, so by the time they go home, it’s 5 o’clock, and they’ve really not eaten,” explained Trangle. 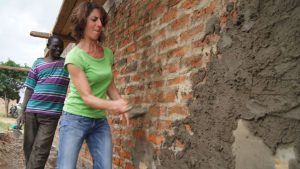 Eventually, Trangle opened another farm school in Uganda. They have about nine acres. The student farmers grow a variety of produce; corn, bananas, and peanuts.

“Some of it’s for cash crops, and some of it’s to feed the children,” said Trangle.

The schools are successful, and graduation rates are on the rise. They have jumped from 62 percent to 92 percent. Trangle recently teamed up with the Minneapolis Jewish Federation to develop another farm school at a private Jewish school in Uganda.

And although Uganda is thousands of miles away, Trangle is dedicated to making a difference in the lives of people she now calls family.