“We went and got a nice stainless oven,” Stone said, pointing at a large oven in the kitchen. “Doesn’t look like it’s from 1985, but it is.”

Only this version of the longtime northwest suburban staple runs a little differently than the one Stone owned and operated along 42nd Avenue for the better part of two decades.

“This one’s more like a virtual kitchen, per se,” Stone said. 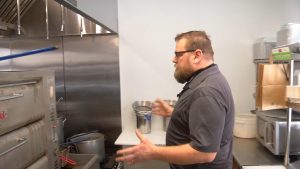 Yes, they still serve a lot of the old favorites people grew to love, but every single order will come via a food delivery app, such as Uber Eats, DoorDash, or Grubhub.

“They’re all kind of tied in together in one system,” Stone said. “That’s one really nice thing about this facility, is that you have one system that integrates all of those together.

The facility he’s referring to is a new commissary kitchen.

Twenty-nine restaurants under one roof

Restaurants will have their own individual space where they take orders and prepare food for a team of drivers who will deliver the meals to your home or office.

At some point in the near future, there will be 29 restaurants operating out of the Minneapolis space. Sweet Taste of Italy is the first. 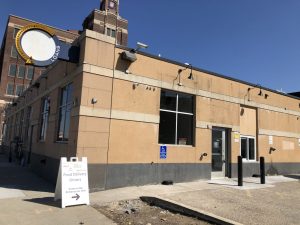 This nondescript building in downtown Minneapolis is the new home of Sweet Taste of Italy.

“It is a nice community of restaurants that will be here, so that’s kind of cool too for us,” Stone said.

With this setup, the delivery apps will allow Sweet Taste of Italy to get food to their core customer base in Crystal, New Hope, Robbinsdale, Brooklyn Center and beyond.

‘It’s one of those things where they’ve shown us a lot of love, you know, we see it online, wishing us well, and hoping we come back soon,” Stone said of his old customers. “So this just seemed like the best way to kind of give back to them.”

However, one thing they lose with this concept is the face-to-face interaction with customers.

“Yeah, that is definitely a sacrifice that we’re making,” he said.

It’s a small price to pay, but the important thing for Stone is that in the end, people will once again be able to fulfill their sweet craving for a taste of Italy.

“I want to be the fastest kitchen in this whole facility,” Stone said.

In addition to the commissary kitchen, Sweet Taste of Italy still operates its Brooklyn Park location as well as a food truck called, Kenny’s Meatball Wagon.