Each of the Democratic candidates has raised more than $4 million, and like any hotly contested campaign, they’ve exchanged negative accusations against one another.

On Wednesday, they held dueling news conferences to rally their supporters and trade criticisms. 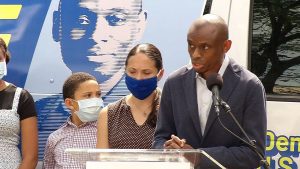 “The day after George Floyd was murdered, when I was at 38th and Chicago, protesting with Nekima Levy Armstrong and many other thousands, and I mean thousands of people in this district that were speaking their voices of frustration and anger, which were justified; Congresswoman Omar was launching her virtual book tour,” Melton-Meaux said during his press conference. “That’s what she was doing. She should have been here with the people, protesting, expressing the pain that we suffer but yet she was promoting her own celebrity and brand.”

That argument was a common theme among the participants of this news conference Wednesday morning, where supporters of Melton-Meaux argued that Ilhan Omar’s national profile as an outspoken progressive hasn’t done much for the Fifth Congressional District.

On the other side, Congresswoman Omar has ads running that question the progressive credentials of Melton-Meaux, citing his past of defending corporations accused of mistreating workers.

Omar addresses media at press conference of her own

At an afternoon news conference streamed on Facebook, Omar’s supporters defended her national profile. And despite some of the negative ads running out there, Omar says she’s trying to stay above the fray. 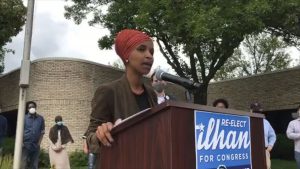 US Rep. Ilhan Omar speaks at a press conference Wednesday

“What I hear on the doors is people who say how atrocious it is that people spend so much energy in mudslinging,” U.S. Rep. Omar said. “How can somebody run on a campaign to end divisiveness and bring so much division, so much hate into Minnesota’s 5th? So our job really has been to stay above the fray, to try to do the work on behalf of the people, and to go about bringing our district collectively together to fight for the right things.”

Meanwhile, the Minneapolis Star Tribune reports that the Minnesota DFL charged Melton-Meaux with violating federal election laws by hiding the identity of some of his top political consultants listed as limited liability corporations.

Melton-Meaux called the charge “false” and said it was a desperate attempt by the DFL to resurrect Omar’s campaign, which he says is “falling apart.”