Charred remains are the only thing left of what were once two townhome units.

“You don’t like to see any damage like that, and the smell’s just nasty,” said Bob Thelen, a crew leader for the Golden Valley Parks Department. “You know, the burn smell.”

Thelen is referring to a fire that started Wednesday morning in a townhome along Harold Avenue in Golden Valley.

“I would say in my 39-year career, this is in the top 20,” said Golden Valley Fire Chief John Crelly. “Very significant fire, and we’re lucky that only two units were destroyed in this fire.”

Officials from the Golden Valley Fire Department say they received a call about the fire shortly after 8:30 Wednesday morning. 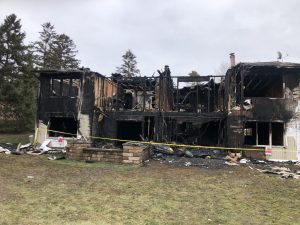 When crews arrived, the back of the building was fully involved.

“As far as fires that I’ve seen in my career, this definitely was a very significant, fast moving fire that was impacting people and structures,” Crelly said.

The right place at the right time

But it’s what happened before firefighters got on scene that Crelly wanted to highlight.

Meanwhile, Jack Graven, a St. Louis Park resident happened to be on his morning coffee run.

“I was turning left to go back home like I do every day, and I saw some smoke over the trees and I was thinking, that seems a little odd,” Graven said.

Immediately, they all made their way to the home to see if anyone needed help.

“We noticed the three people that were sitting outside of their building, sitting on the doorway,” Thelen said.

“And we helped get the older man outside of the house, keep him warm, got him across the street,” Graven added. “I actually happened to be up north hunting this last weekend, so I had all my warm clothes in the back of my truck. They were in shorts and T-shirts so I just grabbed jackets, hats, whatever I had; made sure they stayed warm, and stayed safe.”

Investigators say the actions of Graven and the city employees helped immensely.

“Based on the way this fire was growing and moving, if these three individuals had not stepped up to the plate to help rescue the three people, there certainly would have been fatalities,” Crelly said.

In addition to destroying two townhomes, the fire partially damaged a neighboring unit. The cause is still under investigation.

But it’s the heroic efforts of two Golden Valley city employees, and one passerby, who helped an already devastating situation from turning out much worse.

“If my family or myself were in this situation, I’d hope that someone would stop and help, just like myself and the others did,” Graven said.