The mayors of Brooklyn Park, Golden Valley, New Hope and Robbinsdale, and a city council member from Crystal have signed a letter urging Governor Tim Walz and other elected leaders to push forward the Bottineau Blue Line light rail project. Specifically, they are asking leaders at the state and county level as well as on the Metropolitan Council to push forward a deal with BNSF Railway Co. to advance the project like it has in other light rail corridors. 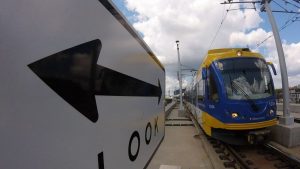 “We’ve been waiting and waiting and waiting. The time for waiting is over,” said Golden Valley Mayor Shep Harris, who signed on to the letter. “We in our communities are tired of being locked outside of the room when decisions are being made.”

Harris was a part of a coalition of local leaders who visited Washington, D.C., in the spring of 2019 to lobby for the line. Since cities started working on the project in the 1980s, areas along the proposed light rail corridor have been revamped and some even have artwork in preparation for the future project. Construction was supposed to have already started.

But the project remains in limbo because part of the proposed line would require the cooperation of BNSF. Proponents of the Blue Line Extension project want elected leaders to get BNSF to negotiate.

“If BNSF truly believes in being a good corporate citizen, then come back to the table,” said Harris.

‘An Example of Systemic Racism in Action’

The Letter provided by local city leaders also highlights the number of people living in poverty and experiencing transportation barriers in the northwest suburbs that would be served by light rail. The letter calls the power struggle “an example of traditional power structures ignoring communities of color and is systemic racism in action.”

“All the communities are having these conversations about systemic racism and we’re calling it out,” said Brooklyn Park Mayor Jeff Lunde. “You have arguably the most diverse set of suburbs in the metro and we’re still waiting for transit options to serve us. This line is designed to go through the areas of most need.”

Lunde says Bottineau Blue Line advocates have been delivering the same charts showing the need for the line for the last two years. He says Blue Line advocates supported the creation and push for the Southwest line, and the Blue Line would like the same dogged approach from elected officials to get the work started in an area that needs it most.

“We know what they can do when they want to,” said Lunde. “We saw the ‘A-game’ with the Southwest Line. We’re getting the ‘D-game.'”

Lunde says he thinks often of a college student from Robbinsdale who endured a 90-minute commute each way to get to North Hennepin Community College in Brooklyn Park.

“We are not all equal,” said Lunde. “In Brooklyn Park, it has always been our stance that [the Blue Line] is a way to help people in poverty.”

Outgoing Hennepin County commissioner Mike Opat, who represents many of the cities who signed on to the letter, says he’s sympathetic to the cause.

“The demographics speak for themselves.  This line is arguably more important to fill the need for better transit and demonstrate equity in public investment than any other LRT line built to date,” said Opat in a statement to CCX News. “For some reason, my resolve to build this line and that of the affected cities has not been as contagious as I had hoped it would be.  All of the other lines have enjoyed great advocacy from state and federal officials.  Hopefully this might yet occur for Bottineau.”

CCX News has also reached out to Governor Walz’s office and the Metropolitan Council for a response to this letter. Met Council Chair Charles Zelle provided the following statement:

The Council continues to work with Hennepin County on a pathway for the Blue Line Extension. We understand how transit projects can be transformative for many generations to come. We also fully understand city and community members frustration about BNSF’s position of not having BLRT as part of their future plans. We are committed to working with project partners to invest in a transitway that connects people to local and regional opportunities.”